The couch is as packed as The Rock’s schedule. An empty chair sits nearby, but Dwayne Johnson squeezes in with Dany Garcia and Hiram Garcia, who are not only his partners in Seven Bucks Productions, but also his ex-wife and her brother. So the three of them are close in every way possible.

Speaking exclusively to TheWrap to lay out their projects for the next several years, they hope the hits will be as close together as they themselves are on the couch. New Line’s “Rampage,” premiering this week, is only the beginning. The Rock might not even have time to run for president: “We have a full slate,” he explained.

“We are a young company — we’re less than five years old — but we are blessed in the amount of work we do,” Dany Garcia said. “We want to continue to make content that just gets seen all over the world.”

Johnson and Dany Garcia founded Seven Bucks Productions five years after their 11-year marriage ended in 2007. Despite the domestic split, Garcia remains the wrestler-turned-actor’s manager, and they appointed her brother, Hiram Garcia, as president of the production company last June.

As Johnson has emerged as one of the biggest and most reliable box office draws in the last few years, the company has had a hand in most of his films, including last year’s “Baywatch” and “Jumanji: Welcome to the Jungle.” In total, Seven Bucks has more than 50 films and TV shows in various stages of development.

“With every project, we are looking to push the envelope just a little bit more,” Johnson said. “It doesn’t necessarily have to be bigger, but it has to be different, and if you can make it better, we always want to do that.”

Garcia added: “We want to make them feel something different than they’ve ever felt before. We ask ourselves, can we do it on a different scale?”

One of the things Seven Bucks does best is update dormant intellectual property. “Jumanji,” a reimagining of a 1995 movie that starred Robin Williams, is close to hitting $1 billion in worldwide box office and just became Sony Pictures’ highest-grossing film ever — an outcome none of them expected. With “Rampage,” Seven Bucks hopes to tap into nostalgia for the pixelated carnage of the 1980s arcade game, and add a soulful story.

The film stars Malin Akerman, Naomie Harris and Jeffrey Dean Morgan, as well as a massive gorilla, crocodile and wolf. As the animals level 10 blocks of Chicago, The Rock’s primatologist character, Davis Okoye, tries to connect with the gorilla, his friend. What could have been another soulless CGI monster movie became something else.

“The really big shift was creating the relationship between Davis [Johnson] and the albino Gorilla named George [played by Jason Liles] and finding that heart to anchor the movie so it wasn’t just a typical monster movie,” Hiram Garcia said. “There is one of the creatures that can actually emote to the audience, so that we’re going on a journey with them as they’re going through this.” 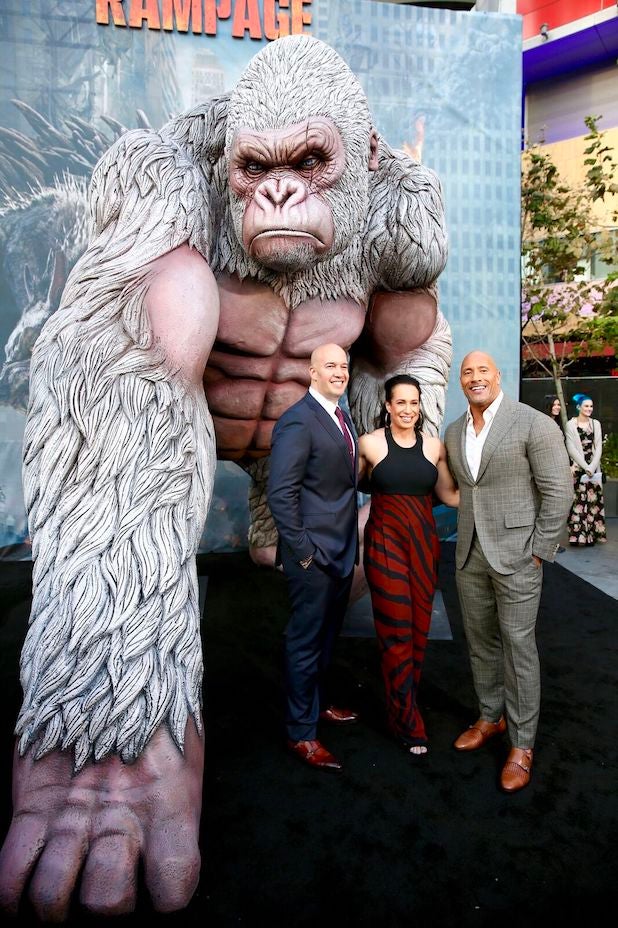 Last week’s Los Angeles premiere drew 5,000 people — making it the biggest premiere of The Rock’s career — and the Seven Bucks team delighted in the roars, laughter and cheers. The Seven Bucks trio took the audience reaction as a sign that some stories are best told on the big screen as opposed to SVOD.

“More than ever, it’s harder to get people into theaters because there are so many options, especially with the streaming services and because home technology is so good, and for us as filmmakers we take great pride in making sure that we’re creating content that you need to see in a theater,” Hiram Garcia said.

About their plans to release films SVOD, Dany Garcia said, “We’re not there yet.”

Asked about the fans’ praise for the movie online, the Rock laughed: “All the ones I paid — I paid them all.”

But Johnson and the Garcias have also learned that not all old IP resonates equally, as the disappointing results for Paramount’s R-rated reboot of “Baywatch” proved last summer (The film, budgeted at $69 million, grossed just $58 million domestically, and had less than stellar reviews).

Also Read: Dwayne Johnson Says He Would 'Have Knelt or Raised My Fist in Solidarity' in NFL Anthem Protests

“We went into ‘Baywatch’ with the best of intentions, and there were some challenges with ‘Baywatch’ that we thought we could overcome in terms of the existing baggage, and ultimately, when we delivered it, it didn’t hit the mark,” Johnson said.

“We had all the right elements to make something so special,” he said. “There were a lot of good learning lessons, and you hope not to learn these critical lessons as you’re swimming and as you’re releasing the film — you hope to learn them earlier, but you learn and you grow nonetheless, and it was a fine a– kicking.”

He added, “I would take another crack at ‘Baywatch’ if we could do it again.”

Fortunately, the 45-year-old star has some sure-fire hits in the works. The Seven Bucks slate includes next summer’s “Fast and Furious” spinoff that will center around Johnson’s character, Luke Hobbs, and Jason Statham’s Deckard Shaw — a plan Universal has had for years, Johnson said.

“To get to this place now where we have the opportunity to build that out and create a larger footprint for the IP is not only critical for the existence of the overall IP of ‘Fast and the Furious,’ but also it’s a tremendous opportunity for us to for example hire [director] David Leitch and some other surprises that we have in terms of casting and put our own touch on it,” he said.

“This is such a great opportunity to expand that world in a distinct way that has the Seven Bucks imprint on it,” added Hiram Garcia.

“For us, we just want to continue to push our relationships, push them to international markets, have a bigger footprint, continue to work with domestic and international partners, and do more movies,” Dany Garcia said. “We have a lot to do. We’re busy, but there’s more.”

Seven Bucks has bucked Hollywood convention by not lining up an exclusive deal with any specific studio — it has projects set up at Universal Pictures, Sony Pictures, Warner Bros. and more.

That gives the team more creative freedom — and negotiating power. Almost every major studio bid on rights to the action comedy “Red Notice,” with Universal and Legendary winning out and handing The Rock his career-best $20 million-plus payday, which he joked made him “drastically underpaid.”

“We are blessed enough to have relationships with the heads of companies and studios, so having a first-look deal would actually be limiting,” Dany Garcia said. “Knowing what we’re great at at one studio and what would be better at another studio gives us so much freedom.”

Johnson said that the team had considered a first-look deal when they first got the company off the ground. “We thought, ‘Is there a place that makes sense for us?'” Johnson said. “It evolved into the place we’re in now, which is realizing that, as Dany was saying, it would be a limited scenario for us to have a first-look deal and it’s worked out incredibly well but even so benefiting the studios as well.”

Also Read: Dwayne Johnson Lays the Smack Down in 'Fighting With My Family' First Look (Video)

Johnson keeps adding films to his slate. He has already wrapped on Legendary/Universal’s action film “Skyscraper,” due July 13, and MGM/WWE Studios’ comedy “Fighting With My Family” (in which he only has a brief cameo) due Sept. 14 — as well as another season of his HBO series “Ballers.”

Next up is New Line’s superhero movie “Shazam!” (in which Johnson will not star but he is executive producing). Johnson will begin shooting Disney’s “Jungle Cruise” in May alongside Emily Blunt and Jack Whitehall, with Universal’s untitled “Fast and Furious” spinoff tentatively to follow this fall.

Johnson and Garcia recently launched their own ad agency, Seven Bucks Creative, with a campaign for the athletic gear maker Under Armour and Johnson’s brand Project Rock, starring The Rock himself. Several other projects are in the pipeline for the creative ad agency as well. And the company has had its digital arm, Seven Bucks Digital Studios, up and running for almost a year, creating original content in partnership with media company Studio71. 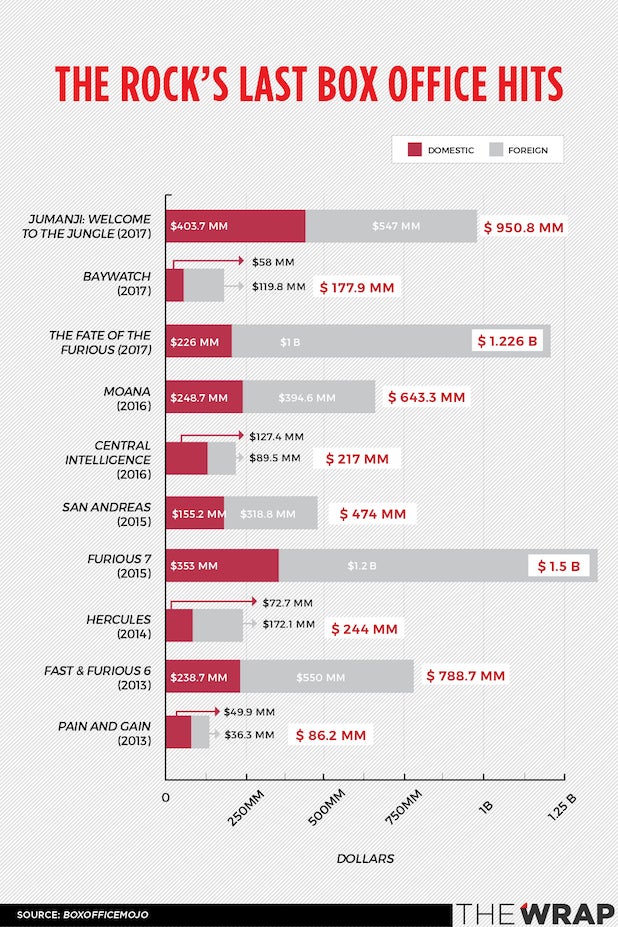 Johnson is clearly taking advantage of his moment as one of Hollywood’s last remaining bankable movie stars. And he said he has no regrets about passing on projects that wind up becoming hits — though he declined to name any.

“I had to tell Spielberg… kidding. There was no pass, that would never happen,” he said. “I personally can’t think of anything that we’ve said no to that’s gone away that I have regretted that I didn’t star in. Once it gets made, you have to chalk it up and point to the scoreboard and say, ‘alright, you’re done’ and that goes on to someone else and you wish them well. That’s happened a bunch of times, it’s gone to somebody else and it’s done well. Like ‘Lincoln.'” [Laughs]

“It went to that other guy,” Hiram Garcia added, referring to Oscar-winning actor Daniel Day-Lewis.

And then there’s that other role a lot of people hope The Rock will play.

“I’m incredibly flattered that there is a good amount of people that would like to see me run for the presidency,” Johnson told TheWrap, responding to widespread speculation that he might transition to elective politics in the future.

“At the same time, there is a tremendous level of respect that I have for politics and also an awareness that what I know is not the business I am in,” he said. “I’ve never played the game of politics. That said, because of the respect and the reverence I have for the American public opinion, I just gotta go to work in terms of learning as much as I can possibly learn.”