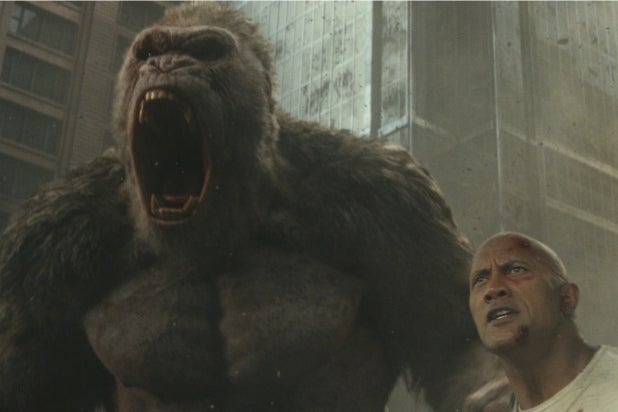 Those who are familiar with the city of Chicago will get to see some of its downtown destroyed in “Rampage,” a bread-and-butter Dwayne Johnson vehicle that is heavy on plot and light on character and reason and thrills. This film is based on an arcade video game that featured large-sized creatures knocking down buildings and running amok, but that basic idea has been swamped here by too many convoluted plot lines and extraneous characters.

“Rampage,” which is directed by Brad Peyton (“San Andreas”) and written by four credited male screenwriters, begins with a flat-out rip-off of the ending of the first “Alien” movie from 1979. A rather impressive single shot in space takes us smoothly into a spaceship in distress, where we see disembodied body parts floating in the cabin area. The remaining female crewmember manages to escape, but she is not long for this world or this movie.

Johnson plays a primatologist named Davis Okoye who used to work in the military before focusing on saving gorillas from poachers. He has a bond with an albino gorilla named George, a frisky primate who has been taught sign language by Okoye (including how to give someone the middle finger).

Watch Video: 'Rampage': Dwayne Johnson Is Back to Save the World in New Trailer

Johnson is given a knowing star entrance where we see him from behind and the camera moves in before he turns to speak, and it doesn’t really matter what he says. Everything about Johnson’s performing style is stripped-down, earnest, simple, and somewhat comical, and he has gotten a lot of mileage out of that.

That space opening comes back into play when we find out about an experiment based around a new technology pioneered by geneticist Kate Caldwell (Naomie Harris) as a way of helping her dying brother. But the tech was diverted and fell into the hands of the villainous Claire Wyden (Malin Akerman), who is looking to make lots of money off of the technology with the help of her bumbling henchman Brett (Jake Lacy).

Claire and Brett have hired a military outfit to do some dirty work for them, and this outfit is led by Burke (Joe Manganiello). Peyton sets up yet another star entrance from behind for Manganiello as he walks to a helicopter before turning to speak, and this is bewildering because it turns out that Manganiello is barely in this movie.

Yet another character is introduced, Agent Russell (Jeffrey Dean Morgan), who seems to exist just to relay lots of plot exposition and generally grind the movie to a halt. Morgan plays this part in a Christoph-Waltz-in-a-Tarantino-movie fashion, with lots of self-satisfied smiles and an obnoxiously slow delivery of his lines.

There comes a point where we finally get to an oversized George and an oversized flying wolf and an oversized crocodile-dinosaur hybrid wreaking havoc in downtown Chicago, and this is fairly diverting at first. We do get to see what looks like the John Hancock Building slowly fall over to the ground, but this is pretty much the extent of the imaginative destruction here.

If you’re going to destroy most of downtown Chicago, why not have one of the creatures kick the Adler Planetarium into the water, or pick up and hurl the Ferris wheel at Navy Pier like a discus? The effects are just competent here, and sometimes less than that. There comes a point when one of the characters falls into George’s mouth, and this descent is no more or less visually convincing than when Alfred Hitchcock had Norman Lloyd fall off of the Statue of Liberty in “Saboteur,” a movie that was made over 70 years ago.

In the middle of the building wreckage, Johnson mainly just stands around and sometimes delivers a one-liner for a would-be laugh. There isn’t anything much at stake here, and when the movie tries to get sentimental about Okoye’s feeling for George, it becomes static and empty.

There’s no romance with Harris’s Kate, and when they mention that possibility toward the very end it doesn’t feel at all organic. “Rampage” is a movie that gets buried in its own top-heavy plot, collapsing itself under that weight just like the Chicago-area buildings do on screen.