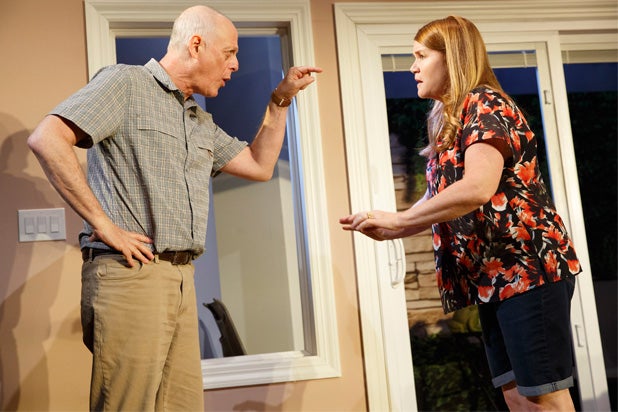 An older married couple, Pete and Mary, are not from a place called Rancho Viejo. They’re recently retired, and it quickly becomes apparent that they have absolutely nothing in with their new neighbors, most of whom live and still work in this desert town near the ocean. But is Rancho Viejo a town or just a place where older people live? In the Playbill, playwright Dan LeFranc reveals that it’s “an American suburb in a temperate climate” and the time is “recently, but not that recently.”

There are danger signs in those Playbill descriptions of place and time for LeFranc’s new play, “Rancho Viejo,” which opened Tuesday at Off Broadway’s Playwrights Horizons. The place is clearly southern California, and although we never learn where Pete (Mark Blum) and Mary (Mare Winningham) are from, it’s probably a place like Iowa, the birthplace of so many relocated Californians of previous generations as we already know from Billy Wilder’s “Double Indemnity.”

LeFranc has written Pete and Mary’s new neighbors to be shallow and glib, much as any theatergoer would find “recently, but not that recently” shallow and glib. Their conversations are fixated on sex and real estate, and whenever Mary tries to change the subject by bringing up her interest in going to a nearby art fair, she’s treated as though she just passed gas.

Mary’s fixation on art fairs is meant to signal her interest in culture, but you might find yourself siding with those realtor wives who are thinking Hobby Lobby. Pete, on the other hand, gives the hour-long first act of this three-hour, three-act comedy its real juice. He could be one of those Iowans whom Fred MacMurray talks about in “Double Indemnity,” since Pete repeatedly finds himself morally shattered by little everyday occurrences like the neighbors losing their dog or total strangers getting a divorce. It’s all very 1940s but intriguing in a soybean-farmer-in-the-Mojave sort of way.

Even more fun is the way total strangers keep popping up in Mary and Pete’s living room. Those cameo appearances include a Spanish-speaking lady (Ruth Aguilar), a creepy young man (Tyrone Mitchell Henderson), and a guy (Bill Buell) who keeps stuffing party food into a plastic bag and leaving without saying a word. Or is this not a living room at all but a communal space or clubhouse that’s meant to signal a geriatric “Friends”-type living situation? Daniel Aukin’s lax direction keeps us guessing.

In time, we learn that the Dane Laffrey-designed set (a long modular couch with a small ivy-covered patio in the back) functions as several characters’ living rooms and we are meant to see Mary and Pete as hopping from party to home then back to another party throughout the entire first act.

This realization, when it comes, is a true disappointment. Suddenly, what had been most interesting about LeFranc’s play (the odd appearances of these strangers) disappears and we’re left with Pete and Mary and their not very friendly neighbors. As delivered by Blum, Pete’s extreme disorientation continues to amuse for the play’s first hour. Julia Duffy’s realtor wife also diverts with a crassness that’s as cold to the touch as her frosty silver hair. She often freezes out Mary by simply exhaling. And Mark Zeisler’s unpublished writer-husband perfectly personifies that surfer boy who stayed too long at the beach.

What doesn’t make sense is why these characters (and a few others) would continue to invite Pete and Mary to their parties for the hour-long second act. The only real character development is the neighbors’ ever-deepening lack of interest in Pete and Mary.

LeFranc changes pace and locale for the hour-long third act. Pete finds himself terrorized by a cactus, which unfortunately does not lead to an early death.