Randy Rainbow is back once again with a new parody video, and this time, he’s tackling new legislation in Florida that’s been dubbed the “Don’t Say Gay” bill.

To kick off this video, Rainbow sits down for an “interview” with Florida Governor Ron DeSantis, though he bills him in the chiron as “DuhSantis.” As always, Rainbow kicks things off semi-seriously, asking DeSantis why he would sign legislation that actively targets one group of people. Of course, he makes sure to follow it with a dig.

“I mean, how would you feel if we signed a bill prohibiting everyone from talking about slimy, self-interested douchebag politicians with no sex appeal, who buy all their suits off the clearance rack at Burlington Coat Factory?” Rainbow snipes. 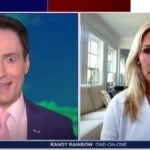 As DeSantis begins to answer, the music kicks in. “GAY!” — as Rainbow aptly called the song — is set to the tune of “Shy” by Mary Rodgers from Once Upon a Mattress. As Rainbow begins singing, he gets in yet another insult to DeSantis.

And naturally, throughout the song, Rainbow counters the “Don’t Say Gay” bill by singing the word “gay” repeatedly.

You can watch Randy Rainbow’s latest parody in the video here and above.