First put into development in 2019, the series centers on two estranged high school friends from Miami who reunite to form a rap group. Rae will write the pilot and serve as executive producer on the series, with “Insecure” alum Syreeta Singleton acting as showrunner. Yung Miami and JT of the rap duo City Girls are co-executive producers on the series. 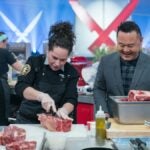 Jefferson recurs as Aleesia: Mia’s (KaMillion) good friend from high school. She’s high maintenance with high standards and is not afraid to remind others of that fact. Perry recurs as Nelly: Mia’s (KaMillion) good and loyal friend from high school. Nelly is not a fan of Shawna and isn’t afraid to let Mia know that. She is also a single mother, but still loves to have a good time partying.

“Rap Sh!t” is Rae’s follow-up to her HBO series “Insecure” which recently concluded its run. Perry appeared on the first two seasons of “Insecure.”