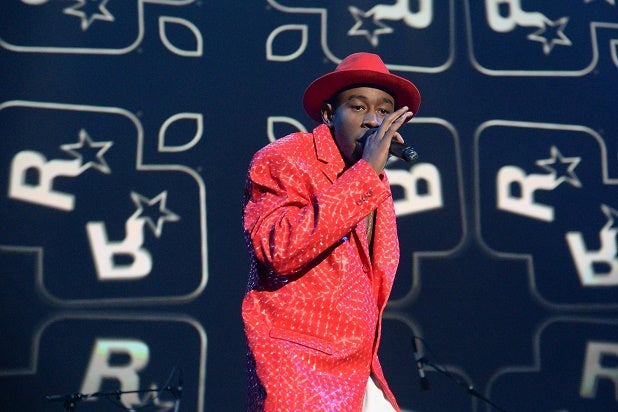 Rapper Tyler the Creator didn’t let a little thing like jail and a charge of inciting a riot keep him from playing a sold-out show in Dallas on Saturday night.

The Odd Future rapper, whose actual name is Tyler Gregory Okonma, was arrested at Austin-Bergstrom Airport on Saturday. Police say the 23-year-old incited a large crowd of fans at the South by Southwest Music Festival to push past venue employees controlling access to a Thursday party that was already at full capacity.

Inciting a riot is a misdemeanor, which carries a penalty of up to a year in jail and a $4,000 fine. Tyler was released Saturday after securing a $25,000 bond and played to a packed house at the House of Blues in Dallas, according to the Associated Press.

Officers who were at the scene said in a warrant that Tyler yelled for fans to push their way inside twice, and that a bartender had to protect a woman from injury in the resulting push. Police released a video from the concert that shows fans bursting through a gate at the Scoot Inn in downtown Austin.

A similar crowd incident prevented Odd Future from obtaining a visa to New Zealand. At the time, officials said they were a public threat based on incidents at past performances in which they have incited violence.”

Tyler and members of the Odd Future collective were denied a visa to travel to New Zealand in February after immigration officials there said they were a potential “public threat” because of past troubles, “including incidents at past performances in which they have incited violence.” They cited a 2011 incident in which police were called to a comic book store in Boston where fans became unruly.