On Sunday, Nattiv won Best Live Action Short for his movie “Skin” — about a white supremacist father and his young son — giving Israelis a rare and much-welcomed moment of kvelling.

Just how crazy has it gotten? Israeli TV crews were staked outside the homes of Nattiv’s parents’, sister, and even his aunt at 5 a.m. local time in the hope of landing a quick soundbite from his relatives, who were still in their PJs.

“It’s all anyone can talk about,” Amit Cotler, an entertainment reporter for Israel’s Channel 13, told TheWrap. “It’s like nothing else is going on in the world right now.”

“Guy’s win was the top story on every news show,” he said, “despite the fact that we’re in the middle of an election campaign right now.”

Even the country’s top politicians weighed in, showering Nattiv with compliments and superlatives for a job well done.

Israeli President Reuven Rivlin tweeted that the film was “a gift for our children and grandchildren, and for the future we wish for them in which they can fulfill all dreams. Great Israeli pride. Mazal tov!”

And Israel’s culture minister, Miri Regev, a conservative lawmaker known for her stinging rebuke of her country’s liberal-leaning film industry, said she was “thrilled.”

Nattiv’s words seem to have struck a chord with Israelis. The win marked a rare moment of celebration on the world stage in recent years. Israeli singer Netta Barzilai won the prestigious “Eurovision” contest last May and Israeli director Nadav Lapid won the Golden Bear for best film at the 69th Berlin International Film Festival with his movie “Synonyms”earlier this month.

According to Gal Uchovsky, a veteran Israeli filmmaker and columnist, Nattiv’s Oscar win is “a big deal,” because it could open doors for other Israeli filmmakers with dreams of making it big in Hollywood.

“The problem in Israel is that we have more talent than means,” he said. “The amount of good scripts is so much bigger than the money available for making films. It’s good for the [Israeli film] industry.”

Nattiv is the first Israeli to take home an Oscar since 1977, when Israeli director Moshe Mizrahi won Best Foreign Film for his movie, “Madame Rosa.” But Mizrahi’s film was a French submission, and is not considered an Israeli victory.

Israel, a pint-size country the size of New Jersey, has had 10 films nominated for the Foreign Language Oscar over the years, but none have won a golden statuette. While Nattiv’s movie is not an official Israeli entry, it might as well have been. 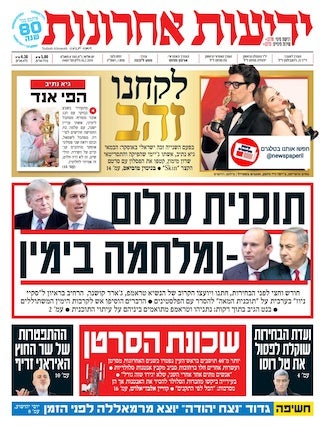 On Tuesday, the morning after his win local time, the country’s largest daily paper, Yedioth Achronoth, proclaimed on its cover in big bold letters: “We Took Gold!”

The story got top billing, ahead of the country’s upcoming elections and the Middle East peace process.

During his Oscar acceptance speech Sunday, Nattiv gave his native county a shout out, telling the audience: “I moved here five years ago from Israel,” adding in Hebrew: “Good night, Israel,” for good measure.

“It’s history for Israel,” Nattiv told TheWrap. “This film was made by Israelis and was written and directed by Israelis. It was edited in Israel, the sound mix was done in Israel. It’s 50 precent Israeli, so I said ‘Laila Tov Israel’ (Good night, Israel in Hebrew), because I wanted to acknowledge that fact.”

Nattiv’s wife, actress Jaime Ray Newman, who also served as a producer on the film, said she too was tickled by the reaction.

The couple is already looking forward to the release of the feature version, which hits theaters on July 26. The movie stars Jamie Bell as Bryon Widner, a real-life former white supremacist who risks his life by turning his back on the skinheads who raised him.

“I hope this short will be an amazing launching pad for the feature,” Newman added.

The two said they were still trying to absorb the magnitude of the win, which made them household names in Israel overnight.

“I’m overwhelmed by all the reaction,” Nattiv said. “I need a week just to return all the messages from people from my past, present and future.”

Hopefully it will sink in by the time they visit in April for Passover.

“Our daughter has never met her grandparents,” Newman said, “so we’re taking our beautiful Alma there to meet them.”