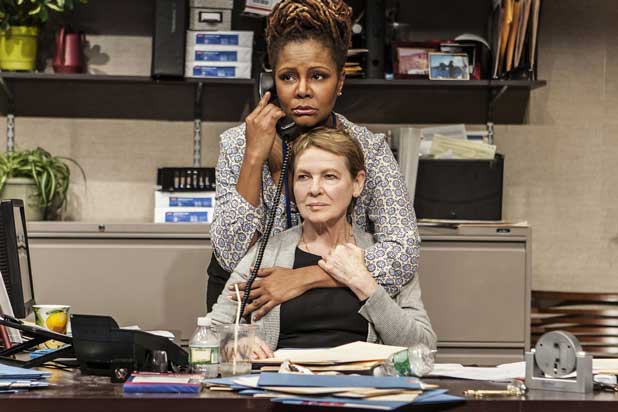 Dianne Wiest is the moth that hovers around the flame that is Tonya Pinkins.

Unfortunately for this little office moth, that flame quickly turns into a blowtorch in Joel Johnson’s new play “Rasheeda Speaking,” which opened Wednesday at the Pershing Square Signature Center.

It’s obvious from the moment Jaclyn (Pinkins) steps into her workplace, a doctor’s office, that this middle-aged black woman carries much history with her. Before she arrives, her coworker Ileen (Wiest) and the doctor (Darren Goldstein) have been talking about her “attitude” and how best to discipline her, transfer her, fire her, get her out of their lives. This premise may not sound good in print, but Johnson turns it into a raucous, funny, and not at all subtle comedy.

In the August Wilson masterpiece “Ma Rainey’s Black Bottom,” the characters talk about Ma Rainey as if she were a monster. And when Ma finally shows up, she’s worse, much worse.

Johnson’s set-up here is similar. Ileen and the doctor talk about Jaclyn’s having committed the mortal sin of missing five consecutive days of work due to toxins in the office air – and she’s been on the job for only six months!

Jaclyn doesn’t disappoint when she finally walks through the office door. She not only starts sneezing and coughing, and complaining about the foul air and why her many plants have not been watered, but to make matters worse, she’s wearing a black lace top that would draw stares on a cruise ship. It heats up from there, especially when Jaclyn learns that the doctor has promoted Ileen to office manager, even though it’s only a staff of two, Ileen and her.

Jaclyn is also racist and she is right when she calls Ileen “pale and pasty” looking, as if she could disappear into the beige of the office walls.

It’s difficult to imagine two more dissimilar but great actresses than Pinkins and Wiest. There’s a benign, fluttery neurosis at the core of most Wiest performances (her Helen Sinclair being the notable exception). No one blinks as much and as effectively as Wiest, and in “Rasheeda Speaking,” she moves like a moth, making her easy for Jaclyn to catch and toy with. Pinkins, on the other hand, commands her space – and everyone else’s too – and she goes from blowtorch to bulldozer when it comes to handling a patient (Patricia Conolly), whose only mistake is to suspect she is growing a tumor somewhere in her body.

Cynthia Nixon makes her directorial debut here, and it’s an auspicious one. She doesn’t overstate little details – like the fact that, despite her shortcomings, Jaclyn seems to be a dynamo at plowing through papers while Ilene never does much of anything at her desk but sip on an iced latte.

Also Read: Sting’s ‘The Last Ship’ to Close on Broadway

One of the most winning aspects of “Rasheeda Speaking” is what Johnson only implies: If born white and/or male, Jaclyn would not only run the doctor’s office, she’d be performing the surgeries as well. Johnson’s characters might expose their true colors too soon. He gives each of them at least one race card too many, but Nixon prevents any of them from turning into an obvious villain, and when Jaclyn describes what it is to be a “Rasheeda” – the word white male professionals use to describe middle-aged black female laborers – the audience stops laughing and listens, really listens.