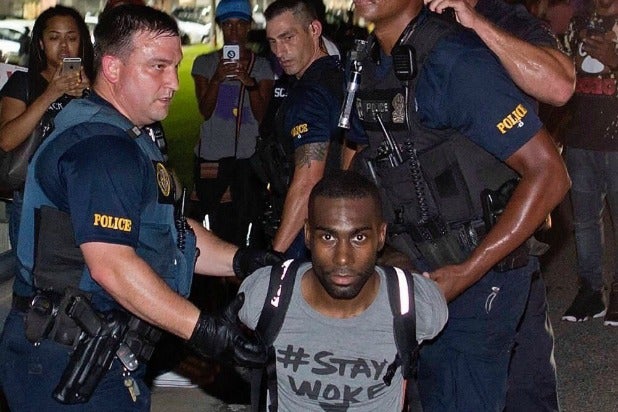 Mckesson, a prominent leader in the BLM movement, was detained during a Saturday night protest in Baton Rouge, where the death of Alton Sterling has inflamed tensions. Mckesson had used Periscope to document the event. He was later charged with “simple obstruction of a highway of commerce,” according to documents posted online. Saturday was Mckesson’s 31st birthday.

He was released late Sunday and told the New York Times he believed he was arrested unlawfully.

But before he was released, the hashtag #FreeDeray quickly trended on Twitter, with a photo (pictured) of a steely-eyed Mckesson becoming an instant meme.

At least one of your tweets today should include #FreeDeRay https://t.co/7R3YPQjQQX

Jones, a former star of NBC’s “The Office,” joined in with her own thoughts.

I wish people would protect the First Amendment with the same fervor as they have the Second Amendment. #FreeDeray

Her message was retweeted more than 15,000 times.

But it also led to a virulent backlash, some of it evidently from pro-gun partisans who took exception to Jones’ mention of the Second Amendment. Others bashed BLM and indulged in race-baiting.

@iamrashidajones Deport him to Africa and send all the BLM savages with him. He cannot assimilate into American culture.

@iamrashidajones The First Amendment doesn’t cover violence and illegality any more than the 2nd cover tanks and missiles.

@iamrashidajones I wish ppl wld use better judgment when invoking their #1A rights, by not standing in the road & disobeying lawful orders.