In the May 19 episode, Amanda Rollins (Kelli Giddish) asks for his help when a victim of domestic violence — who’ll be played by Jordana Spiro of TBS comedy “My Boys” — is prosecuted.

The former Assistant District Attorney was last seen in the December episode “The People Vs. Richard Wheatley,” in which he defended Dylan McDermott’s mobster for the murder of Kathy Stabler. He successfully deadlocked the jury, resulting in a mistrial, and also succeeded in alienating SVU captain Olivia (Mariska Hargitay), who had begged him not to take the case. 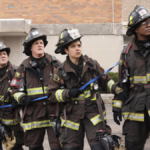 Esparza made his “SVU”debut in Season 14 and became a series regular the following season, before leaving in Season 19. He has since returned as an “SVU” guest star and also appeared on “Law & Order: Organized Crime.”

Give Me My Remote first reported the news.