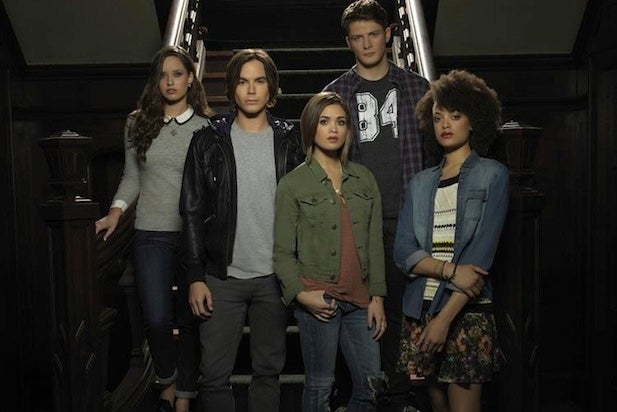 ABC Family’s “Pretty Little Liars” spinoff, “Ravenswood,” begins its run without the push of its sister show on Tuesday night. And, the executive producers are intent on letting it establish its own world.

“What became clear to both us and ABC Family is that there was a real hunger on the part of the audience for stories that pushed the boundaries of the supernatural, and were frankly a little more scary,” Dougherty told TheWrap of “Ravenswood’s” roots in “PLL’s” Halloween specials.

“We’re going to try to feed that beast as best we can by telling more supernatural stories — the kind we couldn’t tell on Rosewood,” he said. “Things might be a little weird in Rosewood, but it’s not like Ravenswood.”

The series premiere last week introduced Caleb (Tyler Blackburn) to a new team of characters, who are all haunted by something very dangerous and dating back generations.

Of course, there’s always the possibility that an “A”-like character could be behind the horrors of “Ravenswood” in the end, but Dougherty said that’s not a path they plan to go down.

“My feeling is basically that we’re committed to it,” he said. “We’re doing things here that are clearly in the realm of the supernatural. I mean the whole idea was basically to do something that would be very satisfying for the audience — we wanted to do more, not water it down.”

TheWrap spoke with Dougherty about the characters and storylines that emerged on the series premiere and what to expect going forward on the show.

Curiosity could be the surest way to find danger in both Rosewood and Ravenswood.
Certainly in both towns, satisfying your curiosity comes with a cost. And all of our fans are always asking for answers, and we tell them we’ll give you answers but you might end up with more questions if we do.

What do the core five characters have in common?
Well, they may appear to not have anything in common when you first meet them, but they’re actually linked by actions of other people. They’re going to find that there was an event in history in this town that has been rolling downhill for the better part of a century, and they’re standing right in the path, and they’ll have to deal with some otherworldly history if they’re going to stand as individuals in this group.

We’ve learned that there’s a “black widow” story surrounding Olivia (Merritt Patterson) and Luke’s (Brett Dier) mother. What’s the impetus for making sure the adults have their own riveting dramas?
I’d love to sit here and say that we invented that, but I think it’s really an adage that you find with ABC Family. It’s one of the reasons that the network has been as successful as it has because they want these shows to appeal to families. They want mothers and daughters watching them as well. So it gives us a chance to talk about parents, talk about loss — you know Caleb [Tyler Blackburn] is someone who doesn’t have a family and Miranda [Nicole Gale Anderson] is looking for a family.

See photos: ‘Pretty Little Liars’ Halloween: A Look Back at All the Mystery and Madness

In the case of “PLL,” we do 25 episodes per season, and we like to have a sense of the real long-range story arcs. It’s easier to get there if you have at least a set of directions, if not a map, of where you want to go. And it helps us stay coherent, or as coherent as we appear, by knowing where we’re going.

That’s really one of the things we’re trying to apply to “Ravenswood.” It’s interesting since it is a new show, and we’re creating a new mythology, we’re projecting out thinking what would we want to do? What would we want to be? What have we established for ourselves?