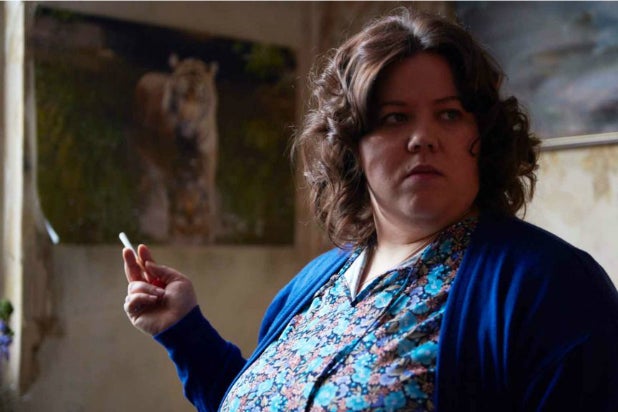 The first person we meet in “Ray & Liz” is elderly Ray (Patrick Romer). Alone in a tiny room, abandoned by his wife Liz (Deirdre Kelly), he has taken to his bed seemingly permanently, waking only long enough to drink as much as it takes to keep himself drunk. He keeps a photo of himself as a young man with his bride stuck to a mirror next to a religious pamphlet that delivers the only foreshadowing this film feels like giving: a Bible verse instructing children to “obey [their] parents in everything.”

“Ray & Liz,” Richard Billingham’s debut feature, punctuates its main action with visits to this room, with the rest of the quietly downcast story taking place during the 1980s, as Ray (played in flashback by Justin Salinger, Amazon’s “Hanna”) and Liz (Ella Smith, “The Voices”) descend into poverty, despair, and alcoholism in a council flat outside of Birmingham, England. Their children — Richard (first Jacob Tuton, later Sam Plant) and his younger brother Jason (Callum Slater, then Joshua Millard-Lloyd) — are along for the ride, suffering the neglect that comes with domestic dysfunction.

“Ray & Liz” didn’t begin life as a feature film: Billingham’s early photographs of his parents, who bear a striking resemblance to the actors portraying them here, were part of 1997’s talked-about “Sensation” exhibition, curated from the collection of contemporary art owned by advertising mogul and art world patron Charles Saatchi. Billingham’s work was candid, intimate, and quite often uncomfortable to witness, revolving around the subject of his parents’ daily life, which included unflinching looks at the disintegration of their marriage and health.

The plot here, then, is mostly episodic glimpses into drunken mishaps, threats of violence, parental disinterest, and children escaping the squalor by any means necessary, either to the local zoo or to the temporary tranquility and care of friends’ homes. Billingham, now the adult filmmaker, remains an observer, going so far nearly as to erase his own childhood self from the story. His actor stand-ins hover around the action but rarely participate. Instead, the camera stays fixed on Ray, Liz, and then 10-year-old Jason, whose eventual disappearance, a brief attempt at running away, irrevocably changes the family structure.

Billingham’s famous photos — which were eventually collected in a book titled “Ray’s a Laugh” — are tough-minded and emotionally painful, silent by virtue of their medium. And his live-action version offers a similar experience. Dialogue is minimal, and the adult actors are just as likely to smoke and drink, listless and paralyzed by their surroundings, as to speak.

But Billingham’s direction doesn’t indict; it empathizes. Salinger and Smith endure close-ups most actors wouldn’t want. Along with cinematographer Daniel Landin (“Under the Skin”), Billingham digs into those shots. You can count the hairs on an unshaven chin, and watch lips take endless drags off cigarettes. It’s as if Billingham is trying to locate the answer to a nagging question. These moments provide an emotional narrative, even as the film finds itself unconcerned with traditional plotting, and the result is as reminiscent of memory-based films (like Terence Davies’ 1992 “The Long Day Closes”) as it is of social realist explorations of childhood (such as Maurice Pialat’s 1968 “L’enfance neu”).

There is occasional directorial overreach; one or two pop music cues (Siouxsie and The Banshees’ “Happy House”) that read as obvious, and an interplay with the natural world — a childhood interest for both Billingham and his brother Jason — that veers into repetition, as Jason’s fixation with miserably caged zoo animals hits the nail on the head less quietly than perhaps intended.

Neglected children grow up wondering why their parents wouldn’t (or couldn’t) show proper love and care. And that unanswered need has been fodder for countless retaliatory memoir-based projects. But what “Ray & Liz” offers is the opposite of exploitive or vengeful enumeration of parental failure. Billingham finds grace for his ruined family, even if he refuses to save them, and it feels like an act of forgiveness.

In later scenes, older Ray, still refusing to confront his condition, blames Liz not only for leaving him behind but also for causing his troubles from the start. “It’s your fault I’m like this,” he moans. Her response, as though it’s the first time either of them has considered the question: “What sort of a life is that?” Then she’s gone, leaving Ray to his permanent solitude.