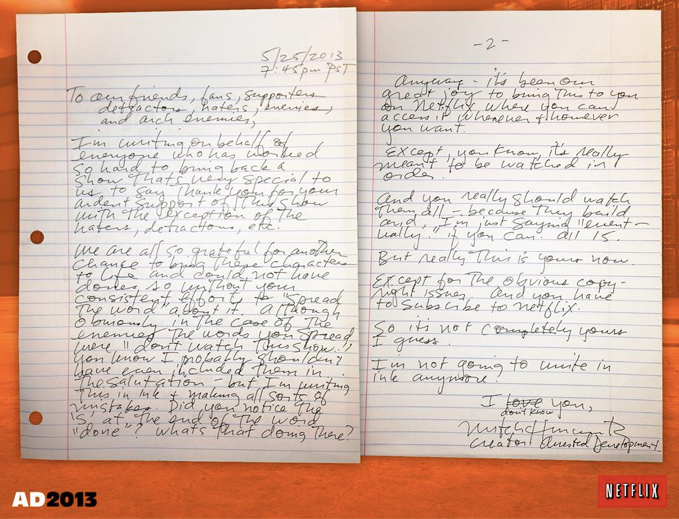 "Arrested Development" creator Mitch Hurwitz has a handwritten message to the fans who helped bring the show back to life on Netflix: The show is yours now.

Except for copyright issues, having to pay for Netflix, etc.

Hurwitz inked a message not just to fans but also "haters, enemies and arch enemies" of the show — who, he admitted, he probably should have left off the note.

Still, he said he was grateful to those who helped make the 15 new Netflix episodes a reality. And he implored them to watch all seven-and-a-half new hours of the show in order, because they build — "eventually."

Here's the full text of the letter, if you don't like squinting at cursive:

I'm writing on behalf of everyone who has worked so hard to bring back a show that's very special to us to say thank you for your ardent support of this show with the exception of the haters, detractors etc.

We are all so grateful for another chance to bring these characters to life and could not have dones [sic] so without your consistent effort to ‘spread the word’ about it. Although obviously in the case of the enemies, the words you spread were ‘don’t watch this show!’ You know I probably shouldn’t have even included them in the salutation – but I’m writing this in ink + making all sorts of mistakes. Did you notice the "s" at the end of the word "done"? What's that doing there?

Anyway, it's been our great joy to bring this to you on Netflix where you can access it wherever + whenever you want.

Except, you know, it's really meant to be watched in order.

And you really should watch them all, because they build, and, I'm just saying "eventually." If you can. All 15.

But really, this is yours now.

Except for the obvious copyright issues. And you have to subscribe to Netfix.

So it's not completely yours, I guess.

I'm not going to write in ink anymore.

I love don't know you,