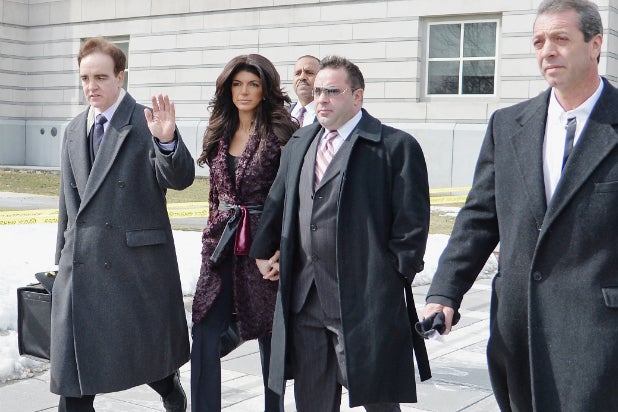 Appearing in a federal court in New Jersey on Tuesday, the couple — who received a 39-count indictment in July and two additional charges in November — were charged as individuals and accepted separate pleas for the offenses committed over a 10-year period between 2001 and 2011. Both had initially pleaded not guilty to all of the charges when they were filed.

Joe Giudice pleaded guilty to those same charges as well as a fifth charge of failure to file a tax return. During tax years 2004 through 2008, Joe admitted receiving income totaling $996,459 but did not file tax returns for those years.

The Giudices still face possible jail time as part of the pleas. Teresa’s new maximum jail sentence is 21-27 months, and Joe’s is 37-46 months.

A judge will decide whether to send either individual to prison at their sentencing hearing on July 8 — and as part of her agreement, Teresa will have to surrender $200,000 on or before that date.

“Teresa and Giuseppe Giudice used deception and fraud to cheat banks, bankruptcy court and the IRS,” U.S. Attorney Fishman said in a statement. “With their guilty pleas, they admitted the schemes with which they were charged. Having now confessed their wrongdoing, the Giudices face the real cost of their criminal conduct.”

As part of Tuesday’s agreement, Teresa Giudice admitted falsifying claims of employment in applying for a $121,500 mortgage loan in September 2001 and another mortgage loan, along with Joe, for $361,250 obtained in July 2005.

According to the U.S. Attorney’s Office in New Jersey, the Giudices also admitted defrauding the United States Trustee in their Chapter 7 bankruptcy filing by intentionally concealing businesses they owned, income received from rental property, and the true income Teresa received from Bravo’s “Real Housewives of New Jersey,” which gave her a raise ahead of the then-upcoming second season.

“Today, I took responsibility for a series of mistakes I made several years ago,” Teresa Giudice said in a statement through her lawyer, Henry E. Klingeman.

“I have said throughout that I respect the legal process and thus I intend to address the Court directly at sentencing. I will describe the choices I made, continue to take responsibility for my decisions, and express my remorse to Judge Salas and the public.

“I am heartbroken that this is affecting my family–especially my four young daughters, who mean more to me than anything in the world. Beyond this, I do not intend to speak specifically about the case outside of court, at the recommendation of my attorney and out of deference to the Government and our legal system.”