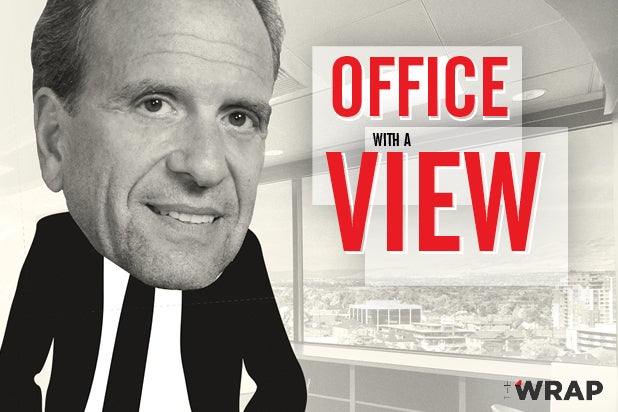 On Sunday, Bravo will debut “Real Housewives of Potomac,” the eighth installment in their highly successful reality TV franchise.

The series comes from the production company True Entertainment, co-founded by Steven Weinstock and Glenda Hersh, who also serve as co-presidents and CEOs of Original Media, the company behind other unscripted hits like “Ink Master” and “Dual Survival.”

“Inevitably we found people who were trying to be ‘Atlanta’-like,” Weinstock told TheWrap of the cast search. “And that always felt derivative. In Potomac, we came upon a world that we were not fully aware of, but was nevertheless distinct in its feeling, flavor and tone.”

In an interview for TheWrap’s “Office With a View,” Weinstock explained why “Potomac” reminds him of ’80s soap opera”Falcon Crest,” which other cities they considered for “Real Housewives” and how he balances running two companies.

How does “Real Housewives of Potomac” set itself apart from “Atlanta,” which you also produce, and the other Housewives series on the air?
“Atlanta” is the biggest ratings success for Bravo right now. This past Sunday’s episode did 3.9 million viewers in L3. So it’s a huge franchise, and I think part of its success is the fact of what I would call the “Oprah Halo.” The African American audience watches it, but other audiences watch as well.

So Bravo came to me and said, “Is there another African American cast out there that isn’t derivative, that doesn’t have the same feel?” And we were able to find this incredible group of women in Potomac, Maryland, of all places. I would liken it to the feeling of “Falcon Crest.” They’re very upwardly mobile, they’re the daughters of very old-monied families. The social grace, etiquette, class, these sorts of things are important in the context of their everyday interactions. It has a very different feel than “Atlanta,” and at the same time it’s dripping with great drama and really exciting and interesting characters.

How did you find this cast?
We went and cast in several cities, and inevitably we found people who were trying to be “Atlanta”-like. And that always felt derivative. In Potomac, we came upon a world that we were not fully aware of, but was nevertheless distinct in its feeling, flavor and tone. And so much so that it really excited everyone that there were different sensibilities, different concerns, different origins that we were exploring.

What other cities did you look at?
I think we went to Houston and Philly and briefly looked at Baltimore as well.

You also produce the “Atlanta” spinoff “Don’t Be Tardy,” how do you know when a Housewife is right for a spinoff?
Kim [Zolciak] is a big, big personality with a truck driver’s mouth. She’s very funny. I sort of think she’s like a Lucille Ball character. You can’t script it. She’s got an incredible combination of vanity, narcissism and humor all wrapped up into one incredibly chaotic situation. Six children and adoring husband who’s a professional football player.

Initially it was kind of a hunch, and it was our instincts that told us she had the comedy chops to be the lead character of her own show. As it turned out, she proved us right. The show this past season had it’s highest rated premiere yet.

You are also co-president of Original Media, how does that compare to True Entertainment?
It’s a very different sensibility in terms of the kinds of shows they make. More male-centric. We thought it was a great challenge, and we thought this could be very exciting. In some ways we’re running two companies and it has it’s challenges no doubt in terms of the business challenges, the creative challenges and the operational challenges. But we were intrigued by the scale and the scope. We thought it would be a really interesting to run these two and keep them distinct in terms of their labels.

Although it’s not like Original Media has never produced anything female-centric. They did Rachel Zoe’s show for Bravo, and we at True did for discovery “Desert Car Kings.” So again, we’ve dabbled, but we’ve been more successful in the female-centric at True, and Original, they’ve been much more successful in the male-centric. But we thought that that made for an interesting recipe, to keep the brands distinct in the marketplace. And things are going really well.

Do you have to approach the two companies differently?
Not really. Good storytelling and good shows require the same elements of creativity. Mostly, it’s just a lot of shows to manage. A lot of people. Between these two companies, we have 16 series across 10 different networks … It’s been a great challenge, and I think we’re really doing well at it.

Do you think your background as a news producer has influenced the way you work as a reality producer?
Completely. Before there was reality television, who else was out there telling stories in the realm of nonfiction on television? It was news. It was documentary producers, or segment producers at magazine shows … Having the PBS and public television, that’s where I acquired a lot of those skills. I think it has a direct correlation to at least what happened in my career.