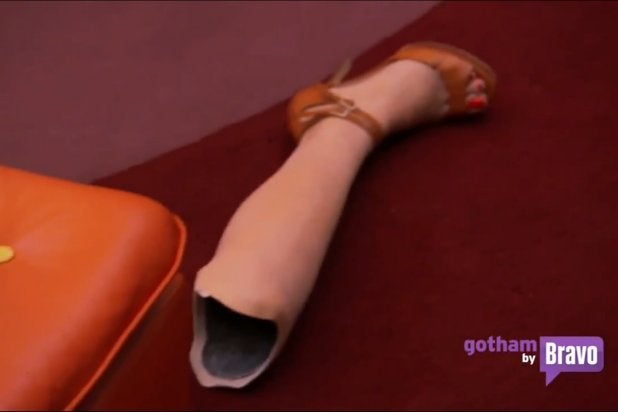 So that just happened.

And Bravo couldn’t be prouder. The network has been touting what Andy Cohen called on Tuesday night’s edition of “Watch What Happens: Live” the “leg drop heard ’round the world” for weeks now in its promos for “The Real Housewives of New York City.”

They saved it for the season finale, which means it wasn’t a shock by any means. But it was nevertheless jaw-dropping to see what could cause a grown woman to throw her own prosthetic leg at someone else.

The situation brewed out of a long-standing feud between Aviva Drescher — the leg thrower — and Carole Radziwell — the leg throwee. Drescher had previously accused Radziwell of hiring a ghost writer for her book, and things only escalated from there between the woman.

After a notable absence through much of the most recent season, Drescher returned for a party. Believe it or not, the leg-throwing incident came from an argument over asthma. The women were accusing Drescher of lying about the severity of her asthma, which was why she skipped out on a recent trip.

The fight grew louder and crazier until finally Drescher snapped, shouting, “The only thing that is artificial or fake about me is this!” With these words, she detached her prosthetic leg and slammed it on the table.

With shocked women all around her, Drescher hurled the leg at fellow castmember Heather Thomson, declaring, “Why don’t you take it? I’ll crawl home.”

Interestingly, it was Radziwell who picked up the leg and returned it to Drescher, still seated at the table. And there it was, an apparent first for reality television.

Any chance it can be a last? And perhaps no one should bother to try and top it, either.

Drescher spoke with Extra TV about the incident. When asked what happened, she joked, “Sometimes my leg just gets away from me.”

Getting serious, she said that she’d been provoked by these women all season, and took issue with being told that she was lying about a physical ailment.

“Some people throw down their glasses in anger, and I was just looking at this Heather Thomson standing above me,” Drescher said. “[She] was screaming at me and calling me a fake and calling me this and that and I just had this knee-jerk reaction to take my leg and bang it on the table to hopefully shut up these shrews who were coming after me.”

On “Watch What Happens: Live,” Thomson was joined by Ramona Singer and LuAnn de Lesseps. The women laughed about the incident as they rewatched the footage, with Thomson speculating that Drescher had been waiting years to do that exact thing.