Kevin Hart’s “Real Husbands of Hollywood” is getting a six-episode revival series at BET+, the streaming service said Thursday.

The original “Real Husbands of Hollywood” was created by Hart, Chris Spencer and Ralph R. Farquhar in 2012 based on a sketch on performed at the BET Awards. The show, which ran for five seasons on BET from 2013 to 2016, followed the daily lives of Kevin and other celebrities, each playing a fictionalized version of themselves, as they venture through their surreal life in Hollywood. 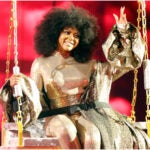