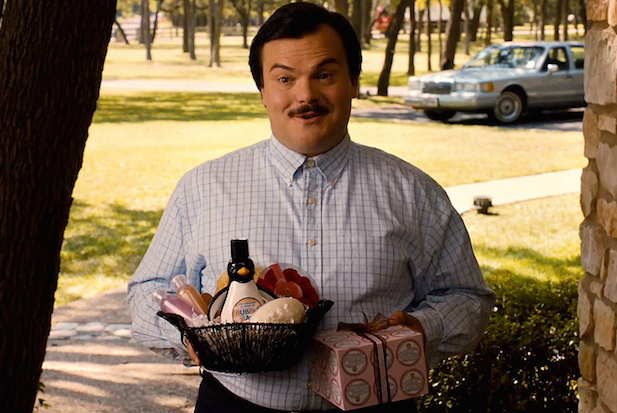 A very worthy sequel to “Bernie” is playing out in real life.

In 2011, Richard Linklater brought to the big screen the story of Bernie Tiede, a beloved small-town Texas funeral director who murdered, dismembered and freeze-dried a rich 81-year-old woman named Marjorie Nugent who was his closest friend and companion. He was caught nine months after committing the crime, painted as a gold digger by the country district attorney, found guilty and sentenced to life in prison in 1999.

Jack Black played the role of the quirky and closeted Tiede in the movie, earning critical acclaim.

On Tuesday, Tiede had his sentenced reduced to time served and released on $10,000 bail, under the condition that he lives in Linklater’s garage apartment in Austin.

As it turns out, Linklater’s film inspired new attorneys to work on Tiede’s appeals; those new lawyers discovered that he had self-help books for those dealing with sexual abuse. They got Tiede to admit having been sexually abused in the past, and then hired a psychiatrist who determined that the shooting happened because Nugent was a vicious and often emotionally abusive person whose behavior stirred emotions that Tiede was unable to suppress.

Also read: ‘Boyhood’ Review From Sundance: In Richard Linklater’s Latest, the Child is the Father of the Man

“If you believe this, that ‘prosecutors are the good guys,’ and we’re supposed to follow the truth no matter where it leads us in our quest for justice, [then it’s our primary duty] to see that justice is done,” Davidson told the L.A. Times.

Then, the psychiatrist who helped district attorney Danny Buck Davidson (played by Matthew McConaughey in the film) put Bernie away in the first place, considered the new evidence and actually agreed with the defense. And so Davidson reconsidered the punishment, and the judge signed on to a deal that released Tiede under the care of Linklater and the condition that the newly freed man get therapy to deal with his trauma.

“Myself and others are determined to help him in any way we can,” Linklater told the Texas Tribune.