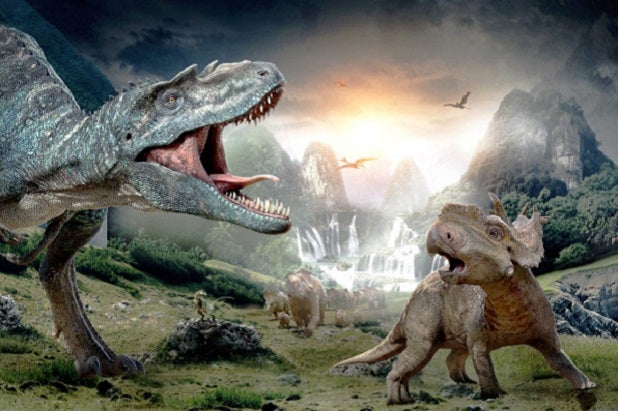 Better not tell the kids, but they might actually learn something at “Walking With Dinosaurs,” the 3D animated family movie based on the BBC TV series that hits U.S. theaters Friday.

“This isn’t ‘Ice Age’ by any means,” said Stuart Ford, chief executive of IM Global, which put together the financing on the film. “The filmmakers made authenticity a priority, and it definitely has an educational component. But it’s a lot of fun, and children will enjoy hearing the story from the dinosaurs.”

Fox, which is distributing “Walking With Dinosaurs,” would be ecstatic if it performed like “Ice Age: Continental Drift.” Scrat and his prehistoric pals brought in $877 million at the worldwide box office last year. The studio also scored big in the spring when another of its animated Stone Age movies, “The Croods,” rocked nearly $590 million.

Those kind of numbers aren’t likely. But Ford and Fox believe that the story and dinosaurs will appeal to kids, while the BBC brand will resonate with parents, who may see the promise of some knowledge seeping in.

“We’re hoping that we benefit from both the nag and drag factors,” Ford joked, referring to kids hounding their parents to take them, as well as moms and dads hoping to provide a learning experience.

It’s an unusual film, like a nature documentary — only on 3D and special effects steroids, and narrated by a prehistoric bird (John Leguizamo). 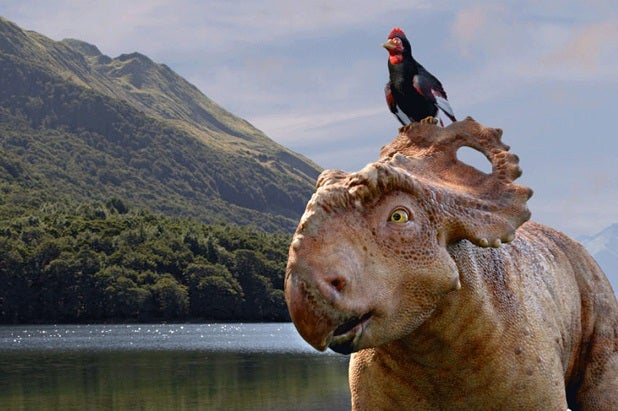 The filmmakers shot the live-action backgrounds for “Walking With Dinosaurs” on location in Alaska and New Zealand (yes, tax breaks), to replicate the terrain that the Cretaceous Period’s giant lizards trod some 70 million years ago. Later, the CGI dinosaurs were added by Australia’s Animal Logic, utilizing the Fusion Camera System developed by James Cameron and used on “Avatar” and “Life of Pi.” It’s a hybrid look suited to the larger-than-life creatures it portrays.

Barry Cook (“Arthur Christmas”) co-directs with Neil Nightingale, a documentary director at BBC Earth. The script is by John Collee, who wrote both “Happy Feet” and “Master and Commander: The Far Side of the World.” Karl Urban, Justin Long, Tiya Sircar and Skyler Stone also provide voices.

Nightingale and BBC Earth’s managing director Amanda Hill wanted to make movies to further the brand developed by the BBC’s 1999 documentary miniseries, and in June of 2010 they partnered with L.A.-based Evergreen Films, run by Mike Devlin.

IM Global, backed by India’s Reliance Entertainment, put together the financing on the $80 million project and in November of that year sold the rights at the American Film Market. Fox came aboard to distribute in the U.S. and some key foreign markets including the U.K., France, Australia, Japan, South Korea, Italy and Latin America. “Dinosaurs translate, we know that, so we had no problem selling it internationally,” said Ford.

An added benefit for Fox, which is marketing the movie in its territories, is that a large number of merchandising deals are already in place. A stage show based on the BBC series has been touring globally since 2007. The Playstation 3 game is out, and there are books, action figures and hatching-egg Christmas toys.

To be clear, for all the authenticity, this is kids stuff. It’s cute and the humor is juvenile. Reviews aren’t out yet, but one blogger said the low-brow dialogue and jokes  “made ‘The Croods’ seem sophisticated.”

“Walking With Dinosaurs” appears to be in a good spot at the U.S. box office. With Disney’s “Frozen” heading into its fifth week, it will be the only new film targeting the kid crowd through the holidays. It’s looking at an opening in the low-teen millions, say the analysts.

“That will work,” said Fox distribution chief Chris Aronson. “The key is to get off to a solid start, then let word of mouth carry it right through the holidays.”