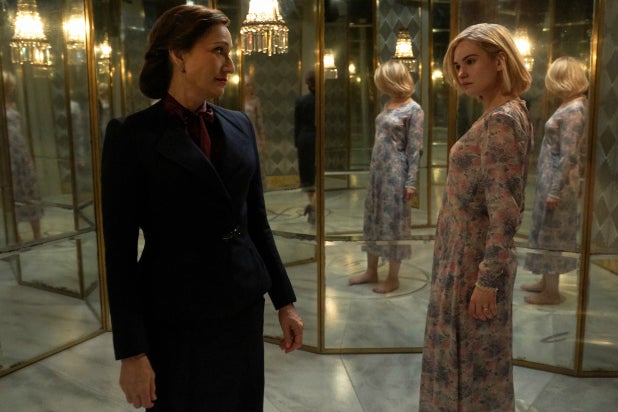 “Rebecca” is a story about a second wife who is bombarded with reminders that she will never be as glamorous, as worldly, or as seemingly beloved as her predecessor. Netflix’s new “Rebecca,” directed by Ben Wheatley (“High Rise”), is a remake that constantly reminds us it will never be as suspenseful, as witty, or as unsettling as its own predecessor, Alfred Hitchcock’s 1940 adaptation of the popular novel by Daphne du Maurier.

This new “Rebecca” has its own sense of style, and it’s not above fully embracing the pulpy delights of du Maurier’s book, but unlike the unnamed second Mrs. de Winter, it can’t quite break free of the inevitable expectations placed upon it.

That anonymous heroine is played this time around by Lily James, and as the story begins, she’s supposed to be a mousy little nothing — except that she looks and comports herself like Lily James — who has been employed as a lady’s companion by rich and vulgar American Mrs. Van Hopper (Ann Dowd, having an exceptionally good time). In Monte Carlo, Mrs. Van Hopper tries desperately to get close to wealthy widower Max de Winter (Armie Hammer), lord of the legendary British estate Manderley and haunted by the recent loss of his beloved, larger-than-life wife Rebecca.

Max sees a kindred spirit in James’ character; she is a non-entity in the eyes of the idle rich, and he would prefer not to be subjected to their pity and their questions. When Mrs. Van Hopper takes to her bed for a few days, Max spends his days with her employee, eventually marrying her and making her the next Mrs. de Winter.

But when she’s installed at Manderley, wife number two can’t escape the constant references to Rebecca’s majesty, particularly from housekeeper Mrs. Danvers (Kristin Scott Thomas). And as the second Mrs. de Winter struggles to fit into her new role as lady of the manor, evidence surfaces that suggests that Rebecca’s death was no accident.

There is a misguided notion that movies made during the Hays Code period of Hollywood were unable to deal with sexuality and obsession, as though subtext and implication didn’t exist. The 2020 “Rebecca” may be allowed to be more forthright about topics like adultery and incest in a way that the Hitchcock version couldn’t, but Mrs. Danvers’ obsession with Rebecca was right there on the screen in 1940 for anyone with eyes to behold. If Judith Anderson could make the details of this servant’s life perfectly evident, we don’t necessarily “need” a new version to be more explicit.

So if Wheatley (and writers Jane Goldman and Joe Shrapnel and Anna Waterhouse) aren’t breaking new thematic ground, what this new “Rebecca” instead offers is period sumptuousness from the cars to the cardigans to a mustard-colored suit that looks like a million bucks on Hammer but will no doubt mislead unsuspecting men into thinking yellow is their color. If you like the tea sets and the rolling lawns of “Downton Abbey,” this is a “Rebecca” for you; the costumers, production designers, set decorators and art directors clearly put in overtime.

Watch Video: 'Death on the Nile' Trailer: A Gruesome Murder Gets in the Way of Gal Gadot and Armie Hammer's Gorgeous Honeymoon

The performances are, alas, mostly overshadowed by the production values, with the exception of Dowd, the one actor here not being yoked by British restraint. Even Scott Thomas, who valiantly attempts to humanize one of the juiciest villains of 20th-century literature, seems so afraid of camping it up that she winds up as a damp match. James seems to play the character the same way throughout, even though she’s supposed to blossom from shrinking violet to stand-by-her-man warrior woman, and while Hammer is one of this generation’s most convincing actors in to-the-manor-born roles, he doesn’t quite nail the tormented-widower aspect. (To be fair, neither did Laurence Olivier back in 1940.)

For those unaware of previous iterations of “Rebecca” (besides Hitchcock’s version, there have been two BBC adaptations, a musical, and even an opera, among various reworkings), this new one will pass by pleasantly enough, un-haunted by the specters of yore. But where the second Mrs. de Winter is plagued by memories of the past, this version may soon escape recollection.

Decade in Review: “Rise of the Planet of the Apes” and “Little Women” rank among the highlights of the decade