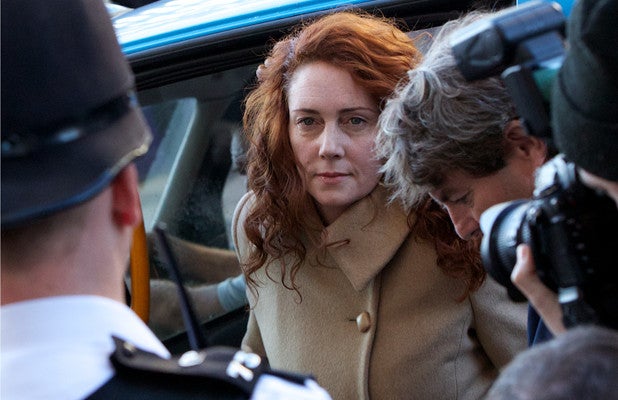 Rebekah Brooks, a former editor of Britain’s News of the World, on trial for phone-hacking, was herself repeatedly targeted for voicemail interception by the private investigator working for her tabloid, a London court heard on Wednesday.

Questioning a police officer about notebooks found in the home of the investigator, Glenn Mulcaire, that included details on Brooks, her counsel Jonathan Laidlaw asked whether Brooks herself had been the victim of voicemail message interceptions.

Brooks, a close confidante of News Corp boss Rupert Murdoch, is on trial with seven others on various charges related to phone-hacking, making illegal payments for stories, and hindering police investigations. They all deny the charges.

Laidlaw told the court Brooks was asked at one point if she would be prepared to be a witness for the prosecution.

The phone-hacking accusations sent shockwaves through the British establishment, led to a public inquiry into the conduct of the press and forced Murdoch to close the 168-year-old News of the World, Britain’s best-selling newspaper.

Brooks and Andy Coulson, another former editor who is also on trial for conspiracy to hack phones, were both friends of Prime Minister David Cameron.

Earlier on Wednesday, the trial heard how Mulcaire, who has pleaded guilty to interception of voicemail messages, had repeatedly hacked into the messages of British actress Sienna Miller at the time the tabloid ran a series of stories about her relationship with actor Jude Law.

The Old Bailey, England’s Central Criminal Court, also heard that notebooks were found at Mulcaire’s home full of details including mobile numbers, security PIN numbers and passwords of the 31-year-old actress and her friends.

The trial was told that Mulcaire often intercepted the voicemail messages after speaking to Ian Edmondson, the tabloid’s former news editor. Edmondson is one of the eight on trial and he also denies the charges.