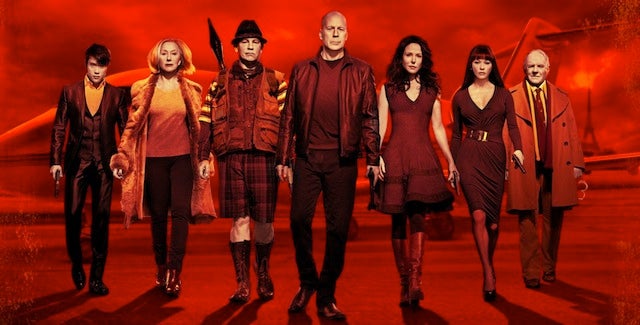 If there is a difference between effortless charm and making altogether no effort at all, “Red 2" defines it.

In his ’90s superstar heyday, Bruce Willis regularly spun screenwriters’ drivel into catchphrase gold with little more than his iconic smirk, but decades later in a lackadaisical sequel no one asked for except perhaps his creditors, he seems unmotivated to smile at all, much less offer a series of emotions that constitute a believable or compelling performance.

Meanwhile, “Galaxy Quest” director Dean Parisot tests the boundaries of acceptable big-screen incompetence not only by eliminating everything that made its predecessor passingly appealing but ignoring any of the film’s own interesting ideas in favor of a glib travelogue that only occasionally tries to mimic a legitimate spy caper.

Willis once again plays Frank Moses, a “Retired, Extremely Dangerous” CIA agent who now mock-enthusiastically shuffles up and down the aisles at his local Costco in an effort to stave off the boredom of domestic anonymity.

His girlfriend Sarah (Mary-Louise Parker), who is decidedly less excited about accumulating enormous quantities of perishable goods, is thrilled by the prospect of some bona fide action after Frank’s longtime pal Marvin Boggs (John Malkovich) shows up, insisting that Interpol is after them.

But when Marvin’s conspiracy theories prove true, the three of them set out to find who’s been pursuing them and why, eventually reconnecting with former colleague Victoria (Helen Mirren) and Frank’s ex-girlfriend Miranda (Catherine Zeta-Jones) as they simultaneously discover an international plot to set off a nuclear weapon in the heart of Russia — which they are going to be blamed for, if they can’t stop it.

There was a time when Hollywood was able to mostly to eliminate those post-“Pulp Fiction” Tarantino knockoffs where hit men and heavies discussed mundane subject matter in between shootouts and showdowns — and no one missed them, either. “Red 2” inexplicably resuscitates that hackeneyed formula, but seemingly only because “Red” and “Battleship” screenwriters Jon and Erich Hoeber had no other ideas about what these characters might do, say or think about.

At the very least, the first film offered a cockeyed examination of former greats as they’re being branded obsolete; its metatextual portrait of Willis’ advancing career notwithstanding, there was some fun to be had in watching the “Die Hard” tower-jumper face off against upstarts like Karl Urban while easing into his golden years alongside a group of respected older actors who were themselves eager to toy with audience perceptions.

Here, Frank, Marvin and Victoria’s age is completely irrelevant, except as a plot device to introduce them to even more aged performers — in this case, a loopy Anthony Hopkins. Remarkably, the Hoebers took no cues from what worked in Robert Schwentke’s original — a scruffily effective “Grumpy Old Hitmen” for the action-movie set — and instead assumed that audiences knew and loved the chemistry of these characters so much that simply putting them into action set pieces would be enough to keep them entertained.

The action is across the board either uninterestingly or flat-out incompetently staged — there are no stakes to any of the gun- or fistfights, any truly perilous situations are defused by hackwork one-liners and the film’s escalation to what should be a pretty significant event, a nuclear explosion, is at best dismissively handled. But the bickering romance between Frank and Sarah, which is cartoonishly complicated by Catherine Zeta-Jones’ Miranda, simply poisons everything else in the film.

Ultimately, what feels more disappointing than the awfulness of “Red 2” is the sense that it didn’t need to be awful, even if it probably never needed to exist at all. Willis’ performances in “Looper” and “Moonrise Kingdom” last year proved that when he’s engaged, or maybe challenged, he can still give amazing performances.