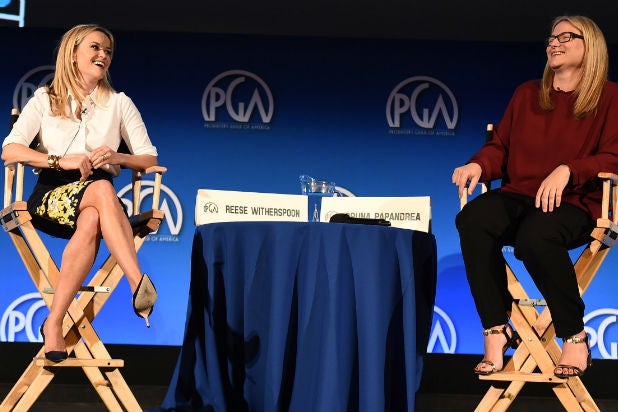 Reese Witherspoon saw the gender equality questions coming a mile away Saturday as she sat down for a spotlight conversation at the 2015 Produced By Conference in Los Angeles.

A signature event of the Producers Guild of America, the two-day program on the Paramount Pictures lot drew Witherspoon and partner Bruna Papandraea, who discussed their young company Pacific Standard’s big successes in “Gone Girl” and “Wild.” But naturally moderator and producer Will Packer brought up the gender equality issues plaguing the entertainment industry.

“What is a movie for women?” Packer asked. A visibly frustrated Witherspoon shot back, “it’s a hot button question, Will.  Don’t kick the hornet’s nest… do you like those questions?”

Packer’s credits include “Ride Along” and “Think Like A Man,” which could be considered African-American themed films. “This business loves to categorize,” Packer said in his defense.

The “Hot Pursuit” star and Papandrea also underscored their commitment to finding more opportunities for women in front of and behind the camera. Witherspoon said she struggled to find female or non-white staff in entry level jobs on movie sets, which she believes is crucial in resume building.

“I feel like it starts very young. Women who are writers and women who are directors are not getting those critical internships when you are 18, 19, 20, 21. I mean… just looking around, I’m standing on set looking for the female interns, Latin American interns,” said Witherspoon.

“When we were doing ‘Hot Pursuit’ we had these Latin American writers. I mean, it was so hard to find a Latin American comedy writer. I’m calling everybody who runs a TV show. We need to develop the talent when they are 18, 19 years old and that responsibility is on us, our companies, other people in this audience that own companies. Let’s find these young women. The best way to learn how to make a movie or a television show is to be standing on set.”

Produced By concludes on Sunday, and will also feature panel discussions with “Devious Maids” producer Eva Longoria and the team behind Fox’s hit “Empire.”