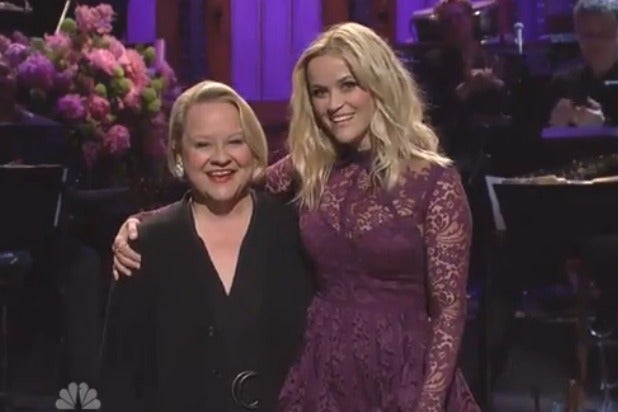 The last time Reese Witherspoon hosted “Saturday Night Live,” America was rebounding two weeks after 9/11 and she was filled with jitters.

The Oscar winning actress, New York City and the country have come a long way since then and when she took to the stage this weekend, Witherspoon turned her opening monologue into a touching and humorous tribute to her mom and the mothers of “SNL” cast members.

Following a slew of chuckle worthy apologies from the actors to their real-life moms, the moms turned the tables and paid tribute to their children by showing rare footage of the stars when they were precocious kids.

The funniest moment involved a young Cecily Strong playing a girl with a bad cocaine addiction. From there, Witherspoon wasted no time appearing in a number of sketches.

The first had her playing a flatulent cougar and co-host of a fictional talk show called “The Scene in L.A.” Strong costarred as her friend and co-host who needed Poise bladder control pads.

On the second sketch, Witherspoon played a wife and contestant on the made-up game show “Picture Perfect.” The sketch was a tongue-in-cheek nod to the deadly Prophet Muhammad art contest earlier this week in Texas.

There was a Hallmark parody where Witherspoon played the concerned coworker of a man who had a grossly inappropriate sexual relationship with their boss and a water park sketch where she doubled as a sexy park employee.

Witherspoon drew the most laughs as a boxed wine sipping busy body with eccentric house robbing friends and a husband possessed by a demon and later as a kitten enthusiast named Purr-sula. On “Weekend Update,” Witherspoon joined Strong again for a bit called “Two Girls You Wish You Hadn’t Started a Conversation With At a Party.”

Anyone hoping that Witherspoon would poke fun at her critically panned comedy “Hot Pursuit,” which opened this weekend, ESPN’s Britt McHenry or even Deflategate, had to be disappointed because that didn’t happen.

At least the cold open was timely as it poked fun at the upcoming Southern Republican Leadership Conference. In it, each 2016 GOP presidential hopeful tried too hard to seem cool.

Taran Killam stole the show as a shirtless ballroom dancing Marco Rubio. Meanwhile, Kenan Thompson impressed as a mic dropping, trash talking Dr. Ben Carson. The parting line? “Won’t it be fun to watch all of these guys lose to Jeb Bush?” Burn.