Regal Cinemas has sued three major insurance companies, claiming they have not paid policy claims for losses attributed to the COVID-19 pandemic that closed theaters around the world for a whole year.

According to court documents obtained by TheWrap, Regal has filed a lawsuit at Los Angeles Superior Court against Allianz, Liberty Mutual, and Zurich American seeking unspecified damages and a court order requiring the companies to pay out the claims.

“Regal has sustained hundreds of millions of dollars in financial losses since March 2020 as a result of the COVID-19 pandemic, including lost ticket sales, concession sales and extra expenses,” the suit states. “Despite issuing broad, all-risk business interruption insurance policies, the insurers have refused to compensate Regal for a single dollar of its losses.” 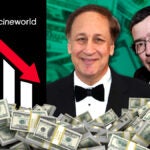 Also Read:
Why Did Movie Theater CEOs Make Such a Killing During the Pandemic?

The suit claims that Regal purchased insurance for business interruption prior to the pandemic and made a policy claim in 2020 after the pandemic forced its 549 locations to close, including 80 in California. But in October 2020, the insurers denied the claim, arguing that the company did not suffer any physical damage to its locations and that the pandemic fell under policy exclusions for “loss of market, loss of use or indirect or remote loss.”

“The insurers’ refusal to cover Regal’s losses lacks any justifiable basis,” the suit states. “It contravenes the plain meaning of the policy and case law in California and across the country addressing similar issues under similar policy language.”

While Regal’s movie theaters, along with those of other chains, reopened nationwide last spring, revenue for those theaters is still well below pre-pandemic levels. Despite a recent boost from the record-breaking “Spider-Man: No Way Home,” domestic box office grosses since the start of 2021 stand at just $4.86 billion, less than half of the $11.3 billion grossed in 2019.

Part of the reason for the drop is simply the lack of titles. According to Box Office Mojo, just 435 films were released theatrically in 2021 compared to 911 in 2019 as studios were measured in their plans to release films in a recovering market. Meanwhile, turnout from moviegoers over the age of 40 remained well below pre-2020 levels as surges in COVID-19 infections fueled by the Delta and Omicron variants kept reluctance among older audiences higher than for the 18-35 demographic, which fueled hits like “No Way Home.”

Reps for the insurers did not immediately respond to TheWrap’s requests for comment.