Cineworld, owner of Regal Cinemas, has reached a deal with Universal on a shortened theatrical window for its cinemas in the U.S. and U.K..

For Regal Cinemas in the U.S., Universal films will be screened based on the same agreement made by the studio with fellow national chains AMC and Cinemark last year. After 17 days exclusively in theaters, Universal will have the option to make a film available as a premium video on-demand offering. If a film earns an opening weekend of more than $50 million, the theatrical exclusivity period will be extended to 31 days.

In the U.K., theatrical exclusivity will be guaranteed for all films for 31 days, with that window extending to 45 days if the film reaches an agreed-upon opening weekend benchmark. 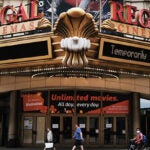 The deal comes as major theater chains continue to make bespoke theatrical window agreements with each major studio as the pandemic has forced the industry-wide 90-day theatrical exclusivity period into extinction. Last week, Cinemark announced in its quarterly earnings report that it has made window deals with Disney, Universal, Sony, Warner Bros. and Paramount, though the details remain confidential.

The deals are also reflective of decades-long trends in the box office as the vast majority of films are making most of their theatrical revenue in the first month of release. Universal franchises like “Fast & Furious” and “Jurassic World” have seen recent installments gross over 90% of their global totals within the first 31 days of release.

Regal reopened all of its cinemas in the U.S. last month, while Cineworld locations in the U.K. will reopen next week. The multinational chain has already reached a theatrical window deal with Warner Bros. that guarantees 45 days of theatrical exclusivity in Regal locations starting in 2022. The company is also in talks with other studios about their own windowing terms.