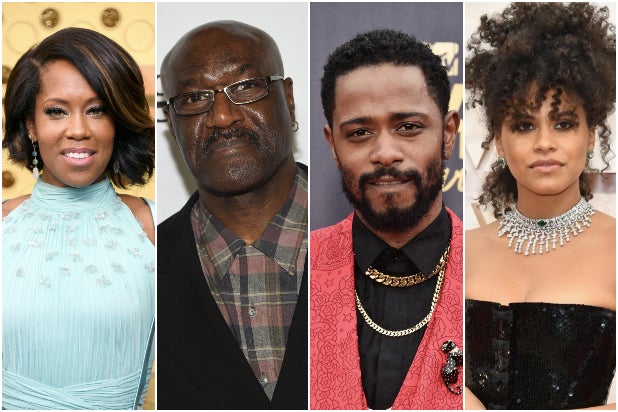 “The Harder They Fall” is a revenge Western directed by Jeymes Samuel, the singer-songwriter, producer and director better known as The Bullitts. He’s also teaming up with his collaborator Jay-Z to write and produce original music for the film.

In this Western, outlaw Nat Love (Jonathan Majors) discovers that his enemy, Rufus Buck (Idris Elba), is being released from prison, so he reunites his gang to track Rufus down and seek revenge.

Samuel co-wrote “The Harder They Fall” with Boaz Yakin, and he’ll also produce alongside Jay-Z, James Lassiter and Lawrence Bender. Samuel and Jay-Z previously worked together on the soundtrack for Baz Luhrmann’s “The Great Gatsby.” No release date has been set.

The film’s cast is led by Majors, who appeared in the Netflix film “Da 5 Bloods” from Spike Lee as well as the HBO series “Lovecraft Country,” and Elba, who will star in the TIFF film “Concrete Cowboy.” Lindo is getting major Oscar buzz for his turn in “Da 5 Bloods” this year as well.

King made her directorial debut “One Night in Miami,” which premiered in Toronto this month. “Atlanta” star Beetz also made a turn in the Best Picture nominee “Joker” last year. And Stanfield is riding high off “Knives Out” and “Sorry to Bother You” in addition to his work on “Atlanta.”

Deadwyler also starred with King in “Watchmen” and Beetz in “Atlanta.” Gathegi is best known for roles in “X-Men: First Class” and “StartUp.” And Cyler appeared in “White Boy Rick” and “Me and Earl and the Dying Girl.”