When Jason Reitman began writing “Up in the Air” about six years ago, the economy was still going gangbusters. Then as the still-20-something-year-old writer-director was making “Thank You For Smoking” and then “Juno,” the American economy and global financial system went into freefall. 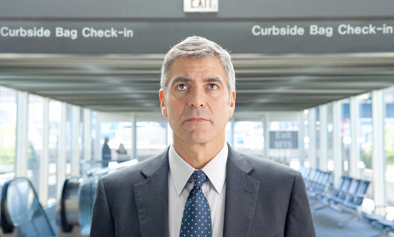 Suddenly that movie he was writing about a commitment-phobic executive who fired people for a living took on an immediate relevancy.

“When I started writing, we were in an economic boom, and it was a satire. As the economy changed, I realized it wasn’t so funny anymore,” said Reitman at Saturday’s press conference for the movie.

It is hard to imagine that this tightly-crafted comedy will not hit a cultural nerve, coming in the midst of so much economic hardship. Reitman opens the movie with scenes of Clooney firing people. And he cast real-life people who’d been laid off in the cities where the film was shot, in St Louis and Detroit.

“We put an ad in the paper saying we were doing a documentary about job loss,” said Reitman. “We got a heartbreaking number of responses.” (Small silver lining here: 25 of those laid off workers ended up with SAG cards.)

Reitman said he got a wake-up call about the real impact of unemployment. “And I learned that the heartbreaking part of them losing their jobs is finding people in the middle of their lives searching for purpose.”

Still, the starting point of the movie – whose title role was written for the unmarried-unmarrying Clooney – was really about the lack of connection in our digital, ever-moving society.

“We’re living in a time when we’re more disconnected than ever before,” said Reitman, who even at 30 shows more maturity than most filmmakers with three times his experience. “We don’t look in each other’s eyes and have a conversation. There’s no real sense of community."

For that, Clooney was tailor made. And the role made him uncomfortable, he admitted.

“I didn’t see it as a comedy. Since it addresses certain things in my life — I found it more harrowing than just a comedy,” he said.

The movie has strong female characters — a love story with Vera Farmiga, another on-the-move executive who he meets for furtive sex in Marriott Courtyards.

And an Alpha female young executive who wants to climb the corporate ladder by innovating firing-by-iChat.

It was like Hollywood home week at the packed press conference on Saturday morning. The Paramount brass showed up, and proud papa Ivan Reitman and a very avuncular Tom Pollock — both are producers on the film.

And seriously, no wonder George Clooney doesn’t give more interviews. (Yes, the man is ubiquitous as we’ve said previously, but you don’t often see him at press conferences, except this week and last.) At least half of the questions are of this nature: Are you cutting back during the economic crisis?