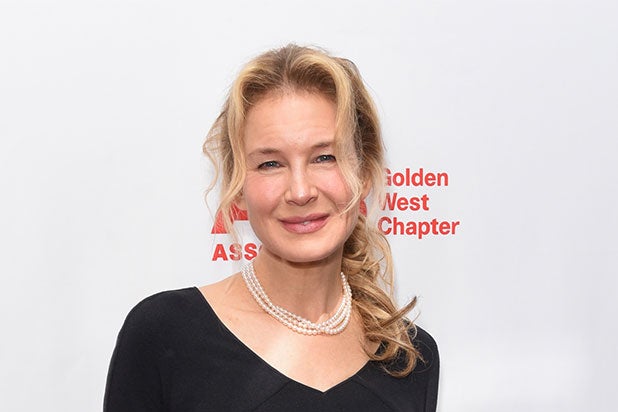 The first photo of Renee Zellweger as Judy Garland for the upcoming biopic “Judy” has been released (see it below).

In the image, posted on Twitter by the official page for the movie, Zellweger rocks a brunette pixie cut and a black, off-the-shoulder dress while standing behind a microphone.

The musical biography is directed by Rupert Goold and written by Tom Edge, and also stars Rufus Sewell, Michael Gambon, Finn Wittrock and Jessie Buckley. It follows the legendary performer as she arrives in London in the winter of 1968, 30 years after she starred as Dorothy in “The Wizard of Oz,” to sing at sold-out concerts.

Garland, famed singer, actress and TV host, died in 1969 at the age of 47. The cause of death was reported as an accidental barbiturate overdose.

Her other credits include “Meet Me in St. Louis,” “The Harvry Girls,” “Easter Parade” and “Summer Stock,” as well as “A Star Is Born” and “Judgment at Nuremberg.” She received a Golden Globe Award, a Juvenile Academy Award and a Special Tony Award. When she was 39, she was the youngest and first female recipient of the Cecil B. DeMille Award.

This isn’t the first time Zellweger has starred as a singer in a movie — she famously portrayed Roxie Hart in the 2002 musical adaptation of “Chicago,” which earned her an Oscar nomination.

See her as Garland here: