In Virginia, former Gov. Terry McAuliffe failed in his bid to return to the office, being defeated by Republican businessman Glenn Youngkin.

CNN called it for the Republican around 9:25 p.m. PT. CBS declared Youngkin the winner just after 9:30.

The loss is a surprise in part because Joe Biden won the state of Virginia by a commanding 10 percentage points over Donald Trump in 2021.

Youngkin entered the race as the assumed underdog, as he endorsed a series of policy positions largely similar to those of Trump, who remains deeply unpopular in Virginia. Meanwhile, McAuliffe was popular during his 2014-2018 term in office and expected to easily return to the governor’s office — he previously served as the state’s governor from 2014-2018. 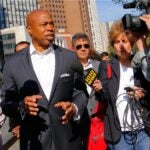 But while McAuliffe largely tried to make his campaign about tying Youngkin to Trump, Youngkin successfully distanced himself from the disgraced former president. In fact, while Youngkin accepted Trump’s endorsement, he didn’t attend a virtual Trump rally in support of his campaign and proclaimed himself a candidate for “forever Trumpers and never Trumpers.”

He also ran on a suite of issues loosely described as “education,” including the absolutely false claim that so-called “critical race theory” was being taught in Virginia high schools — it is not. He also exploited a growing culture war battle in public schools, making a rape case in a Loudoun County school that has been falsely linked to trans teenagers a major campaign issue.

The economy also proved a major issue, with 1/3 of Virginia voters calling it their most important issue. These issues, false or not, proved salient among white voters in particular, and McAuliffe never effectively countered them.

But while pundits will no doubt spend days arguing over who is most responsible for these reversals, it’s worth noting that both states have a long history of flipping to the opposite of the incumbent president’s party.