Episode 4 of “Reservation Dogs” Season 2, titled “Mabel,” sees the return of Elora Danan, who puts her California dreams on hold to be with her dying grandmother. It’s also star Devery Jacobs’ first foray behind the scenes for the FX show, as she pulls double duty playing and writing for Elora. According to the actress, “Mabel” is more about “warmth and beauty and communal closure” than it is about the blunt pain of grief. “Death isn’t necessarily a bad thing,” she told TheWrap in an interview.

Jacobs, who co-wrote the episode with creator Sterlin Harjo, said she pitched the idea as a way to showcase her character “healing” and experiencing death the “right way,” following the premature losses of her friend Daniel to suicide and mother Cookie. As much as “Mabel” is personal to Elora, it’s also a microcosmic exploration of love and care in Native communities.

“In Indigenous communities death is something that’s a really hands-on experience, where I’ve noticed in a lot of Western cultures that it’s a really cold, isolating, taboo experience where the casket is always closed,” she said. “Going to my first white funeral, I didn’t understand it. I was so confused. And I’m like, Where’s the closure? Where are the moments of you getting to say goodbye or getting to laugh about the stupid stuff that person did when they were young?”

Read on for TheWrap’s Q&A with Jacobs, where she talks about what’s next for Elora, why it was important for her writers credit to reflect her full name, Kawennáhere, and how the Emmy snubs for “Rez Dogs” is not going to impact “creating our show for ourselves and for our communities.” 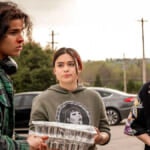 TheWrap: Could you walk me through some of the conversations in the writers room about how this episode was put together?

I remember pitching the idea that grandma Mabel passes and I also prefaced it with like, Oh my God, I can’t believe I’m saying this, this person has already gone through so much. Like, What else are we gonna throw at her? But there was an element of us discussing and breaking down what it would look like for Elora to experience and witness the passing of somebody in the right way, in the way they’re meant to when they’re older and it’s from natural causes and they’re surrounded by family and what that actually means and does for Elora in being able to process and heal through the grief that she’s experienced before, when it didn’t happen in the right way.

Something bigger that we were talking about was how in Indigenous communities death is something that’s a really hands-on experience, where I’ve noticed in a lot of Western cultures that it’s a really cold, isolating, taboo experience where the casket is always closed. Going to my first white funeral, I didn’t understand it. I was so confused. And I’m like, Where’s the closure? Where are the moments of you getting to say goodbye or getting to laugh about the stupid stuff that person did when they were young? Being somebody who grew up in my community and has been to many funerals, there’s such a warmth and beauty and communal closure that happens there.

That was something that I was really passionate about and was why I think Sterlin ended up asking me to co-write this episode. It felt like a lot of pressure and it was a challenge, but one that I ultimately ended up feeling really happy to take on.

And the third part in talking about the lead up to writing this episode is laying out for not only Elora but the audience how what this friend group is experiencing and the fracture that’s happened following the suicide of Daniel, that a similar thing has happened in the generation above them, where Cookie’s [Elora’s late mother] passed away and that ended up sending shockwaves through this older friend group of Rita [Bear’s mother], of Teenie [Elora’s aunt], of Big [Zahn McClarnon], of Coach Bobson [Bill Burr]. And for us, it was important for Elora to see and get a glimpse into what her life could be like should she leave as Teenie did.

There’s so much in there, and there’s so much love for our communities. I know that Sterlin really pulled from the experience of his death with his grandmother. And it was just such a personal episode for all of us. 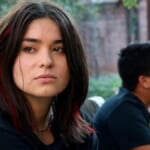 As you said, there’s some parallels between Elora and Teenie’s journeys. There’s this sense that they maybe feel guilt for leaving, but you also don’t want the narrative to shame them for that. Could you talk about balancing that as both a writer and performer?

I think Elora’s feelings about Teenie are complicated, and we didn’t want to create it in one definitive way. We wanted there to be room for all of Elora’s feelings towards her aunt. One of those feelings being anger and resentment for not being there when she could have been and should have been for Elora; the other being Teenie’s guilt for having stayed away when she sees how grown Elora is, and it bringing back all of her own memories of Cookie and how Elora really resembles Cookie and reminds her of her. But also for Elora to see that there can be a way to still be connected to community even after leaving.

All of us in the writers room, we’re all people who were born on our reserves or reservations and are people who ended up leaving for work purposes, for life purposes, and there’s ways for us to stay connected to community.

And when writing it, there was only ever Tamara Podemski in mind. We wrote that role totally for her in hopes that she could do it. I also just especially loved how her chemistry with her sister Sarah Podemski translated and that was the first time they had a chance to act opposite each other on-screen.

One of my favorite lines in the episode is when Big says, “seems like we all should have gotten together before something like death,” and I think that’s so relatable and poignant to so many people. Could you talk a little bit about that particular scene?

We joked about this — that funerals and wakes and the passing of people [are] honestly like the weirdest but most effective aphrodisiac for Native people. And so that was definitely in there, and it was also an opportunity to show another side of Big — usually he’s this dorky, funny character and for him to be given a glimpse into a little bit of his history was something that we wanted to explore.

How did the passing scene come together, and what went behind the decision to end it on maybe a lighter note, where Mabel’s spirit is telling Elora “you did good”?

Going back to, this being actually a healing experience for Elora — that death isn’t necessarily a bad thing. How that means that this person can then pass on in a good way being an experience where Elora can let go of a lot of the grief that she’s had, not only for the passing of Mabel and the relationship that she wanted to have with her but couldn’t, but also being able to let go of the grief she’s hanging on to for Daniel and also for her mom, Cookie.

Ending it on that lighter note is just quintessential ‘Rez Dogs,’ and I loved how Geraldine Keams had delivered it — just rugged and in her bingo outfit being like, I’m a spirit now! It was just perfect.

In one of the scenes, Jackie asks Elora if they’re still going to leave after the mourning period is over and it seemed that Elora was having doubts. Is there anything you can say about where her journey takes her next?

Through Elora running away with Jackie and it not happening in the way that she had hoped and [being] still haunted by these memories of Daniel, that Elora learns that this wasn’t necessarily the thing that she needed, or this wasn’t the way she had hoped to heal from the experience she had with Daniel. I think that there are definitely some doubts with Elora about the future of her California living, but we’re gonna have to find out what happens through the season. It was unexpected for us in the writers room, how it ended up playing out, and so I think it’s gonna be a pleasant surprise for all of our audience members. 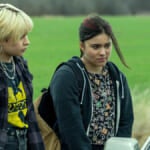 Could you talk about the importance of using your full given name in the writing credits of this episode?

My full name, my first name is Kawennáhere. I always used Devery when I was off my rez because people had a hard time pronouncing names that are not English, but more so it’s a really personal name for me, and it was given to me by my tóta, my grandmother. Directly, it translates to ‘her word is above,’ meaning what I have to say is important. So I have made it my mission to live up to that name. For me, as an actor, I help other people tell their stories and bring them to truth. When it comes to filmmaking, I leave a personal part of myself in whatever I create, and so in this writers room, we all drew so much from our personal experiences, and it just made sense to include Kawennáhere in the writers credit.

If you want to comment, I wanted to give you space to respond to the Emmy snubs for ‘Reservation Dogs.’

Of course I would love for the people I’ve been a part of this show with to be recognized and it would mean so much, but also Indigenous folks have existed on the margins of society — of Western society — since 1492. For me, it was disappointing but kind of unsurprising, and we’re going to be creating our show for ourselves and for our communities regardless of if we’re being recognized or not. At the end of the day, I’m just so glad that it’s resonating with audiences.

Halloween is a pretty contentious time for Native folks because there’s usually so many people making a mockery of Indigenous folks in costume, and so for this past Halloween last year to see so many rez kids and Native kids dressing up as the Rez Dogs during that day, for us, was just solidifying that we’re creating the show that we needed to see growing up for this younger generation and that’s the greatest impact that we could have. 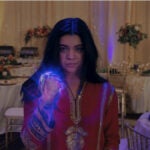