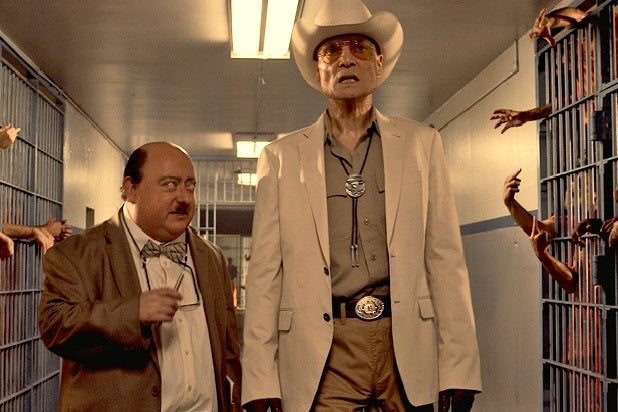 It would be one thing if I or any film reviewer found writer-director Tom Six’s “The Human Centipede III: Final Sequence” to be unclean; after all, Six’s latest entry in the series he began with 2009’s “The Human Centipede” takes great pains to offer wound upon wound, slur upon slur, and violation on violation, with no gender, orientation, ethnicity or religion left unmocked and uninsulted. But Six wants that response; to a no-talent schlock-merchant like him, outrage isn’t part of the marketing plan but rather is the marketing plan, every cry of shock or clutched set of pearls an endorsement for his grim, grisly, badly-shot horror-free horror films.

The thing that wrecks “The Human Centipede III” isn’t how the film is disgustingly, degradingly unclean; instead, Six’s work is ruined by how his film is desperately, depressingly unclever.

This time, Six sets the action in the fictional George H. W. Bush Prison, ruled over by the sadistic Warden Bill Boss (Dieter Laser, who also appeared as Dr. Heiter in “The Human Centipede”), a sweat-soaked shaved-headed sadist meant to evoke either Captain Queeg or Col. Kurtz in his madness and brutality.

Boss’ right-hand-flunky is his accountant, Dwight (Laurence R. Harvey, who also appeared as the silent security guard anti-hero of “The Human Centipede II”), but the prison’s real problems are legion: High costs, inmate fights, guard injuries and other myriad failures.

Boss has his own ideas for how to fix the place, shouting “Medieval torture and castration!” in his strained-vein, hoarsely-garbled English, but mild-mannered Dwight keeps on mentioning an even better idea, if Bill would only watch these two horror movies to see how it might work …

And so, much as the evil in “The Human Centipede II” was inspired by someone in the film watching “The Human Centipede,” Bill and Dwight’s reign of surgical terror is inspired by the prior two films in the series. Director Six even appears as himself to give Boss and Dwight the OK on their plan. (Six is as talented an actor as he is a director and writer, in that he is not in fact talented in any way whatsoever.) By stitching the institution’s inmates into a huge Human Centipede, each set of eliminatory orifices in the chain sewn to the mouth of the poor unfortunate behind them, Bill and Dwight hope to cut down on costs, spur real deterrence and save their jobs from the Governor (Eric Roberts), who has tired of their antics.

But the greasy, grimy level of exploitation and claustrophobic cost-cutting aren’t the problem; the film’s pace is murderously slow, both Laser and Harvey are catastrophically untrained and unprofessional (when Roberts, an actual actor, shows up, the effect is that of a stallion striding among broken-backed ponies), and all of the film’s boundary-breaking taboo-shattering grossness isn’t about anything more than itself.

It is not merely enough for a film to be transgressive; any lout can disgust or appall. The better question raised by a film’s transgression, which “The Human Centipede III” never even begins to approach or ask,  is what the transgressions in a film are for. Six’s outrages are numerous, and specifically brutal towards the film’s only female character, but they’re too idiotically blunt to be read as satire and too disgustingly specific in their anatomical obsessions to read as coarse comedy.

There is a bright spot, or rather a bright sound, in the middle of Six’s sunblasted all-you-can-vomit buffet of atrocities, sexual assaults and racist slurs. Composer Misha Segal’s score is vibrant and voluptuous, with the blaring horns and over-signifying flourishes of the best ’70s exploitation films, a touch of pastiche that works surprisingly well, all things considered. And if you can manage to look past the film’s huge, bloody brutalities, you’ll note that Six clearly has no command whatsoever of basic cinema grammar and storytelling. (Note how Dwight’s mustache changes width, shape and density throughout the film in impossible ways, or how Six himself disappears from the plot’s climax without as much as a note of follow-through.)

At one point, Warden Bill Boss shouts his enthusiasm for the idea of closing the circle, stitching the back end of the last prisoner to the mouth of the first one. That sealed circle — an Ouroboros of excrement, a Möbius strip of mutilation — would be scary if it weren’t already what Six has done with his own filmography, an endless cycle of forced provocations and hard-to-swallow outrages he delights in watching us choke down. Don’t dare yourself to see “The Human Centipede III” because it’s “100% Politically Incorrect,” as the poster brags; shun it instead because it’s 100 percent boring.