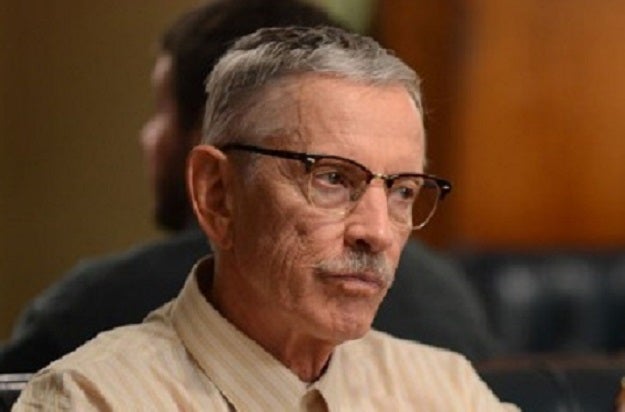 Shot in hazy shades of grey-blue browns and unfolding with the deliberate, stalking pace of a hunter trying to keep silent before a moonlight kill, “The Barber” is a modest but satisfying thriller that’s a little obsessed with its own themes but still gets out of its own way when the time comes.

The directorial debut of Basel Owies, “The Barber” begins with a brief flashback to Illinois in the late ’90s explaining that, despite the questioning of a person of interest, the Chicago police have no leads in the serial slaying of several young girls. The lead detective, ashamed of his failures and for his family, takes the hard way out.

Twenty years later, the one-time person of interest, Eugene (Scott Glenn) has changed his name to escape scrutiny and media attention and works in a small town as, yes, a barber. John (Chris Coy) has come to town to find Eugene, not to punish him for his crimes, but to learn from them and to apprentice with him. Eugene at first claims he’s just a barber, but he gradually decides to share his truth with John, even as John is lying to him.

The interplay between experience and new talent can often improve a film, and there are at least two examples of that phenomenon to point at here. First-time director Owies is working with a script by TV veteran Max Enscoe (“The Ron Clark Story,” “The Facts of Life Reunion”) that shows much darker shades of his previously-affirmed talent. At the same time, Glenn, an actor with a distinguished pedigree and a memorable face is teamed with — or set opposite — Coy, who has many credits to his name (“Deliver Us From Evil,” “Greenberg”) but very few for roles as meaty as this. Coy’s work as John is engaging, careful and clever; he maintains the level of mystery required while still advancing the film’s story and character connections for the benefit of the audience.

The dark and shadowy cinematography of Allen Liu (in his feature debut) maintains the right tone of skulking, stalking and dirty deeds done under cover of darkness. The supporting cast includes a few standouts as well, especially veteran character actor Stephen Tobolowsky as Chief Hardaway, the small town chief of police who’s longtime friends with Eugene.

Glenn is superb — in some scenes he’s folksy and friendly, spouting advice and proverbs; in others, he’s chilling, like when he tells John about seeing a young woman: “I thought, ‘Everything’s easy for her …’ and it filled me with rage and lust.” Glenn may be a familiar face after everything from “The Silence of the Lambs” and “Silverado” in his past to “W.” and “The Bourne Legacy” more recently, but it’s a pleasure to see him in a much more substantive role than Hollywood’s offered him as of late on the big screen.

See Video: ‘Fifty Shades’ Star Jamie Dornan Is as Sexy as a Serial Killer Gets in ‘The Fall’ Season 2 Preview (Video)

While “The Barber” is an R-rated film about a serial killer who preys on women, the film never stoops too far into the lurid, sleazy or bloody. Bad things happen, sure, but there’s no leering, lingering shots of women in peril or fountains of blood. The deaths and violence matter, and the film’s restraint maintains a tone that’s focused on quietly building suspense rather than a constant series of shrieks and jump-scares. Editors Nader Owies and Glenn Thompson handle not just the cuts between scenes but also the film’s flashbacks and fresh twists with deft hands and a steady point of view, even as the lies pile up.

The script’s cascade of masquerades comes fast and furiously; everyone’s pretending to be someone they aren’t, and who knows (or knew) what when becomes a matter of life and death as the climax nears. There are enough reversals and revelations to keep things interesting, though, and while “The Barber” may be a first-time directorial effort, it’s tense and taut enough to make an impression thanks in no small part to the steadying, strong presence of Glenn.