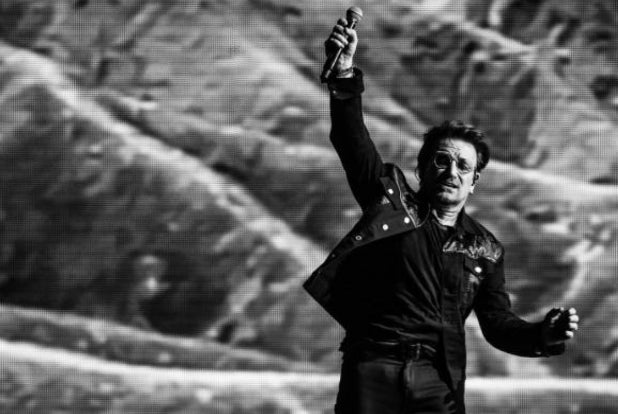 In March of 1987, When I was 11 years old, my mom came home from work saying downtown L.A. traffic was crazy because of U2.

“They were shooting a video on top of a liquor store,” she said.

The Martin Luther King song was “Pride (In the Name of Love),” their biggest hit at the time. The video was for “Where the Streets Have No Name,” from their new album “The Joshua Tree.” And U2 became my favorite band.

They returned to L.A. on Saturday night, to mess up traffic again. But also to remind us what it means to be American.

Like MLK, U2 began as outsiders — Bono told the Rose Bowl audience that even now, he and his Irish bandmates consider themselves guests in this country. And like Dr. King, they prevail upon us, inspire us, and yes, sometimes guilt us to remember the great country and people we’re supposed to be.

U2 is touring to celebrate the 30th anniversary of “The Joshua Tree,” the album that begins with “Where the Streets Have No Name.” It is an album in love with America conceptually, but afraid of America in execution.

In 1987, Bono seemed most concerned about the U.S.’s policy in El Salvador, the subject of the driving, still gut-punching “Bullet the Blue Sky.” Today, America’s problems seem even greater, the cause for alarm even more desperate.

Before launching into the Joshua Tree songs, the band played some of its first hits, opening with Larry Mullen’s Jr.’s jolting snare-stabbing intro for “Sunday Bloody Sunday.”

That’s an uncomfortably familiar feeling for anyone waking up on any given day in 2017 to more news of insane presidential tweets, more menacing sentiment for immigrants and refugees or ominous reports about Russian meddling.

But almost every U2 song has new resonance. The band’s unapologetic fixation with politics, once seen as preachy and uncool, is now everyone’s fixation. Its search for common ground and peace — maybe a little corny during times of prosperity and peace — is the search we all need to undertake to survive. We still haven’t found what we’re looking for.

Though it came out in 2000, U2’s album “All That You Can’t Leave Behind,” felt bizarrely like an answer to the Sept. 11, 2001 attacks, and “The Joshua Tree” can feel even more eerily like a summation of what we face now.

Is “With or Without You” about lovers, or Jesus, or countries that can’t survive alone or apart? A large percentage of the L.A. crowd was of Latino descent, with ancestors from countries very near Los Angeles, with economies, cultures and families closely intertwined with ours, all of which Donald Trump wants to divide with a wall.

Bono made no bones about his plan to tear down walls. He sang again and again the Simon and Garfunkel chorus: We’ve all… come… to look for America. In true American fashion, he wanted to sell us on something: Ourselves.

“Nothing scares the shite out of politicians more than millions of people organized,” he said. “The government should fear it’s citizens, not the other way around.”

But it wasn’t just preaching to a left-wing choir. In the last two decades, Bono has tried, as only an outside third-party can do, to bring together divided factions.

“The party of Lincoln, the party of Kennedy,” he said near the start of the show. “You are welcome here.”

That’s a message increasingly seen on signs outside businesses and churches in the age of Trump, a way of telling immigrants, refugees, and people of every background that they are loved. It isn’t a message usually extended to Republicans, since their leader is so often the one trying to do the excluding.

But Bono was trying to convert them, even flatter them. Pasadena, home of the Rose Bowl, is a rich place, and there were some expensive seats and luxury boxes. There had to be thousands of right-wingers in attendance. He lulled them in with Top 40 hits and stadium anthems and then, at the end of the night, gave the entire audience something few Americans encounter — a long look, via stadium widescreen, inside a Syrian refugee camp.

A young girl appeared and a voice off-camera told her to imagine she was speaking to a stadium full of people. What would she tell them?

She was quiet, and sweet. Not the terrorist our president has sometimes portrayed people like her of being.

She told our stadium full of people she wanted us to be happy — and that she wanted to come to America, where we are. Because our society is civil and good.

Many U2 fans — maybe especially those in the party of Lincoln — long ago adopted a just-play-your-hits policy toward Bono’s speechifying. But Saturday, we seemed to tune back in.

He’s still a great singer, but he’s become a more likable politician. He appealed to our best instincts, as when he noted that U.S. tax dollars have paid for major advances against HIV in Africa and worldwide. He has gotten heat before for including Republicans in his praise of U.S. efforts to stop HIV and AIDS. He includes them anyway.

Then he launched into “One,” and didn’t have to say what was implicit.

The traffic in L.A. is even worse than it was for my mom 30 years ago. The Martin Luther King song still sings. And Bono still loves us, the way a mother loves us, upbraiding us to be the best we can be.

The more things change, the more they stay the same. Unless we change.