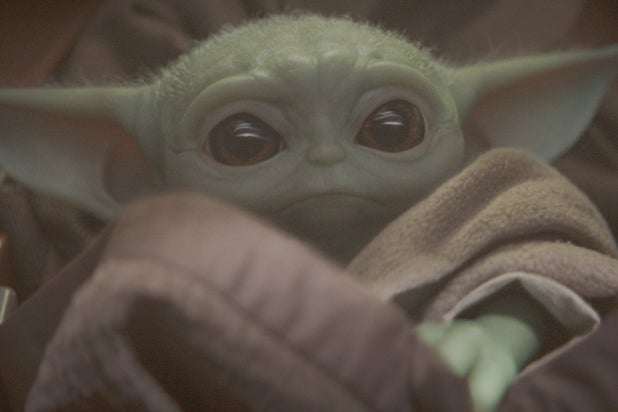 Baby Yoda is all anyone has been talking about since “The Mandalorian” hit Disney+ two weeks ago — and Rian Johnson — who directed “The Last Jedi” and is slated for three more Star Wars Universe films — counts himself among the fans of the cute character.

“He’s amazing!” Johnson told TheWrap while promoting his new film, “Knives Out,” out in theaters today. “I visited the set of ‘The Mandalorian’ a month ago, and I spotted Baby Yoda in the corner and the producer shot me a look as if to say, ‘you can’t say a word!’ I’ve been holding that secret in my heart for forever now. And the memes are amazing. I’m very pro-Baby Yoda.”

On Tuesday, Disney dropped its first official “The Mandalorian” merchandise featuring “The Child,” a.k.a. Baby Yoda, just as the holiday shopping season is about to begin. And while fans had been eagerly anticipating these products since it was revealed last week they would be arriving soon, it turned out these are not the shirts, pullovers, Popsockets, tote bags and mugs Disney+ subscribers were looking for.

In fact, many fans of the “Star Wars” series and its adorable unnamed green toddler took to Twitter to mock the quality of this first wave of products on social media.

The inclusion of a Baby Yoda was one of the reasons for the intense secrecy around “The Mandalorian” in the weeks leading up to its launch. It was the one show that Disney+ did not make available for critics ahead of its Nov. 12 premiere. Now we know why. (Before “Star Wars” fans yell at us, we know he’s not exactly the child version of Yoda — the 900-year-old Jedi Master and mentor to Luke Skywalker — but a member of the same, unidentified species as Yoda.)

As for any update on Johnson’s upcoming “Star Wars” trilogy, the filmmaker told TheWrap that there isn’t one. Recently, The Hollywood Reporter reported that Lucasfilm chief Kathleen Kennedy has a new “Star Wars” film on deck for 2022, but it’s not going to be the one directed by Johnson.

Where do we file “Knives Out” among the filmmaker’s output?