“The White Ribbon,” a sober meditation on life in a German village on the cusp of World War One, filmed in black and white, took the Golden Palm at the Cannes Film Festival on Sunday evening. 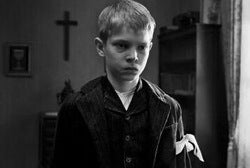 Sony Pictures Classics has bought the rights to distribute both films in the United States.

Haneke, an Austrian director, was praised for his film about a small village that is gradually revealed as a repressive  community where psychological abuse is commonplace, and sinister forces seem to fester among the children.

The title refers to the ribbons some of the village children are made to wear to show their supposed purity. While never mentioning war, the current running beneath the film suggests the tenor of communal life as it was for the generation which 20 years later would embrace Hitler.

Cannes jury president Huppert said it was an "extraordinary film" that "doesn’t deliver any messages, but says important things."

The Times of London hailed its "cold brilliance" and an "uncompromising vision."

Not all notices were favorable. Manohla Dargis wrote in The New York Times: "One of the truths about Mr. Haneke’s work is that his totalizing worldview can feel almost as punishing and sadistic as the cruelty he metes out on screen. That’s part of the point of course: the audience should feel wretched to appreciate that the world can be wretched…"