“Will you commit to ending finsta?” he asked. “Finsta is one of your products or services, right?”

A finsta, if you don’t know, is a fake account, separate from a user’s primary account. It can be used to post more intimate information, used like a diary or used to creep on other accounts. 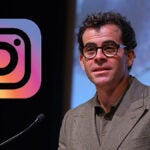 “Finstas are not something that we built,” Davis responded carefully.

Twitter was briefly alight with jokes. Tech reporter Casey Newton quipped, “Running for office on a pledge to end Finsta.”

Insider’s Kat Tenbarge was a little more serious: “If you wondered why there are no regulations for child influencers it’s because our elected representatives are too busy trying to figure out what ‘finsta’ means.”

Political activist Amanda Litman wrote, “Basically every tech hearing includes at least one moment in which I am reminded that the average age of the U.S. Senate is 62.9 years old and that has direct implications — for better & for worse — on the way they govern.”

This comes after Facebook announced Monday that it is “pausing” the rollout of an Instagram application designed just for kids under the age of 13. The pause comes after widespread criticism of the company’s handling of research showing Instagram is detrimental to young people’s mental health.

In recent weeks, Facebook has doubled down in self-defense following a series of Wall Street Journal reports about company’s own internal research about a series of matters, including the toxic effects of Instagram on teen girls. Facebook officials have downplayed the findings to the public as “just plain false.”

In a blog post earlier this month called “What the Wall Street Journal Got Wrong,” vice president of global affairs Nick Clegg wrote, “These are serious and complex issues, and it is absolutely legitimate for us to be held to account for how we deal with them. But these stories have contained deliberate mischaracterizations of what we are trying to do, and conferred egregiously false motives to Facebook’s leadership and employees.”

For the last few years, researchers at Instagram — which was acquired by Facebook for reportedly $1 billion in cash and stock in 2012 — have been studying this impact on its users. The Journal’s findings, obtained from an internal Facebook message board, revealed that 32% of teen girls who felt bad about their bodies felt worse because of Instagram. Among those having suicidal thoughts, 13% of British teens and 6% of American teens linked that desire to Instagram, according to the research.