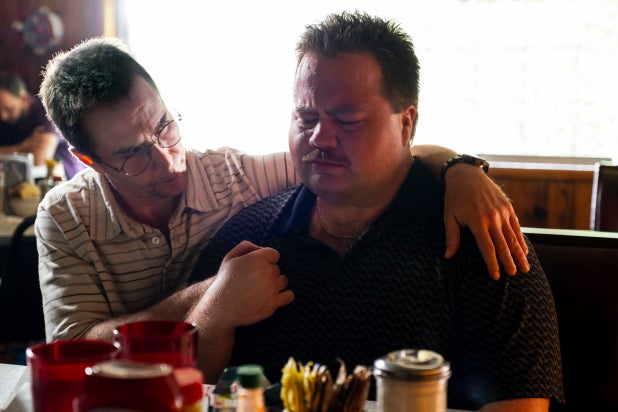 The abiding darkness in heroism — what it sometimes takes, what it can lead to — has been a longstanding interest of Clint Eastwood’s, from his onscreen vigilante icons to his behind-the-camera explorations of real figures (“Flags of our Fathers,” “American Sniper,” “Sully”).

And with “Richard Jewell,” his 38th film as director, his portal into the subject is a harrowing case study indeed: the brave do-gooder-turned-suspect, vilified through the very spotlight originally intended to praise him.

In 1996, Jewell was an Atlanta Olympics security guard when he discovered a suspicious backpack that eventually exploded, killing two and wounding many. Initial publicity made this unassuming figure a life-saving star, since the death toll could have been higher. But when word got out that the FBI considered him their prime suspect, the aspects of his life that weren’t so media-friendly — overweight, wannabe cop, lived with his mother — were suddenly turned against him by authorities and the media into evidence of someone craving attention.

However, the movie Eastwood has made of this peculiar ordeal — from a screenplay by Billy Ray, based on Marie Brenner’s 1997 Vanity Fair article and a new book on the case — is regrettably uneven, a nightmare made ordinary, sometimes ham-fistedly so, and occasionally even eccentric. Outside of its major assets, which include “I, Tonya” scene-stealer Paul Walter Hauser’s unapologetically showy performance as Jewell and Sam Rockwell’s sardonic turn as his underdog lawyer, there’s a mystifying lack of clarity to the dramatic impact this retelling is seeking.

Not that anyone would expect Eastwood to turn a wrongful accusation story into a button-pushing triumph of sentimentalism, but it’s surprising how little emotional resonance Jewell’s upended life receives here, even with Kathy Bates in fine form as his adoring, stricken mother Bobi, and Jon Hamm working his square-jawed-jerk superpowers as the undeterred FBI agent who, along with his partner (Ian Gomez), tries to dupe Jewell into confessing. (The agents’ galling tactics, including asking him to read the bomber’s threatening 911 message into a telephone, seem like bad screenplay inventions, but they really happened.)

As backstory, “Richard Jewell” starts with a few scenes that set up the Forrest Gump-like aspects of Jewell’s personality that would in turn both help and harm him. As an observant if hovering office clerk in the 1980s — which Hauser makes brilliantly awkward — Jewell’s idealism about law enforcement earned him a friendship with low-level attorney Watson Bryant (Rockwell), years later the only lawyer Jewell knew to call.

But prior to the Olympics, his aggressive policing during short-lived stint as an officious, rules-minded campus cop at Piedmont College earned him the ire of the school’s president (Charles Green, “Lodge 49”). And that president’s phone call to the FBI after Jewell’s first burst of hero fame would change the narrative as to what Jewell’s behavior implied.

Early on, Eastwood has loose fun depicting Jewell’s bumbling yet sincere vibe patrolling Atlanta’s Centennial Park, even if a little of his off-putting eagerness goes a long way. The bombing sequence — from the backpack’s placement to its detonation — is plenty suspenseful. And in the aftermath we see Jewell — Hauser’s roly-poly physicality is always marked by a certain pride of purpose — react with dutiful modesty to the media attention, making sure to spread credit to the various law enforcement agencies who helped.

Up until then, it feels like a lo-fi character study of a well-meaning misfit whose cop instincts held him in good stead. But when the story turns toward Hamm’s corrupt fed, in cahoots with a scoop-deranged Atlanta Journal-Constitution reporter played with sultry greediness by Olivia Wilde, and the mess they ultimately make of Jewell’s simple existence, the tones get jumbled.

The gentle-rube comedy seems out of place, the portrait of a venal press becomes hokey (not to mention questionable, if early responses to Wilde’s portrayal of the real-life reporter, who is now deceased, are to be believed), and the stunned response by Jewell and his mom never quite sparks the necessary outrage. Despite the tense interview scene in which it dawns on Jewell that he’s the investigators’ focus (naturally his recognition has to do with his encyclopedic knowledge of crime-solving methods), the movie is content to settle into a ho-hum bunker drama inside the Jewells’ apartment with the media camped outside, and the FBI as unwanted guests.

What works best is the dynamic between Hauser’s Jewell and Rockwell’s Bryant, the former torn between his blind respect for authority and the confusion he feels at being targeted, and the latter facing the uphill battle of convincing his deflated client not to work inadvertently against his own interests by being so cooperative. Their unlikely friendship is a compelling slice of compassion and offbeat humor, even if it sometimes feels deserving of deeper exploration considering the circumstances.

How “Richard Jewell” ends is even more head-scratching; it sputters to a conclusion by way of a mild interrogation, a letter, some tears, and a few where-are-they-now facts. The sense of a terrible injustice finally righted feels strangely tossed off, rendering this particular examination in Eastwood’s canon of the Kafkaesque side of a courageous deed — especially after how good “Sully” was — more like an idiosyncratic movie-of-the-week than the trenchant big-screen drama we’ve come to expect from him.