Want to live a comfortable life? Don’t let a “Modern Family” fan be the one that got away.

The ABC sitcom (still) boasts the viewership with the highest median household income across the Big 4 broadcast networks. That’s unchanged since TheWrap last ran this study in 2013, hence our callback (or perhaps copycat) lede.

The median household income for “Modern Family” viewers thus far this season is $85,300. That’s $8,700 better than the No. 2 show, Fox’s “New Girl” ($76,600). Readers can subtract $200 more for third place finisher “Designated Survivor,” which is obviously tops among new series. The next best freshman show in terms of median income is “Speechless,” which clocked in at ninth overall with $70,400.

Rounding out the Top 10, in order, are “Black-ish,” “The Goldbergs,” NBC’s “Sunday Night Football” pre-game show, “Brooklyn Nine-Nine,” ABC’s “Saturday Night Football,” and a 10th-place tie between “Fresh Off the Boat” and “This Is Us.” OK, so, Top 11. Check out their fans’ respective median household incomes on the first chart below. 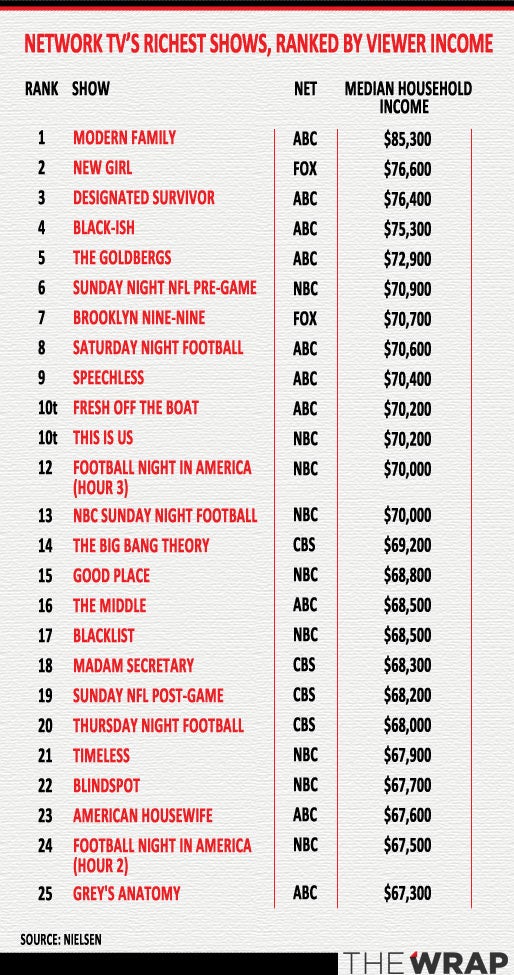 Before we get to the bottom 25 series, we have to single out some on the wrong end of this list — sorry, Fox.

“Empire” has the single lowest median household income among viewers, with $46,400. That’s a full $1,700 shy of the second-worst show, NBC’s “Dateline Mystery.” Fox’s “Rosewood” was one slot above that, with an even $50,000. The Nick Cannon-hosted NBC series “Caught on Camera,” CBS’ “48 Hours,” “The Exorcist,” “Lethal Weapon,” “MacGyver,” “America’s Funniest Home Videos” and “Family Guy” rounded out the brokest 10, in ascending order.

Let’s end this on a happy note, shall we? Three years ago, “Bob’s Burgers” was our “poorest” show, with a median household income of $48,800. The cartoon’s fans appear to be doing a bit better now, which is nice to see.

In all likelihood, those loyal animation fans are probably just getting older along with the show, and have since picked up a raise or two. Or maybe they all just married “Big Bang Theory” fans — smart.

There’s one other important distinction between our 36-month-ago study and this one. Back then, we used a sample set from the key 18-49 demographic, this time we counted all viewers. Still, this is household income, so there shouldn’t be an overly dramatic difference anyway.

Check out the full rankings below. And if you’re enjoying “The Good Place” each week, print this story out, bring it to your boss, and sternly demand a raise. All rankings below count one-week’s worth of delayed viewership where available. 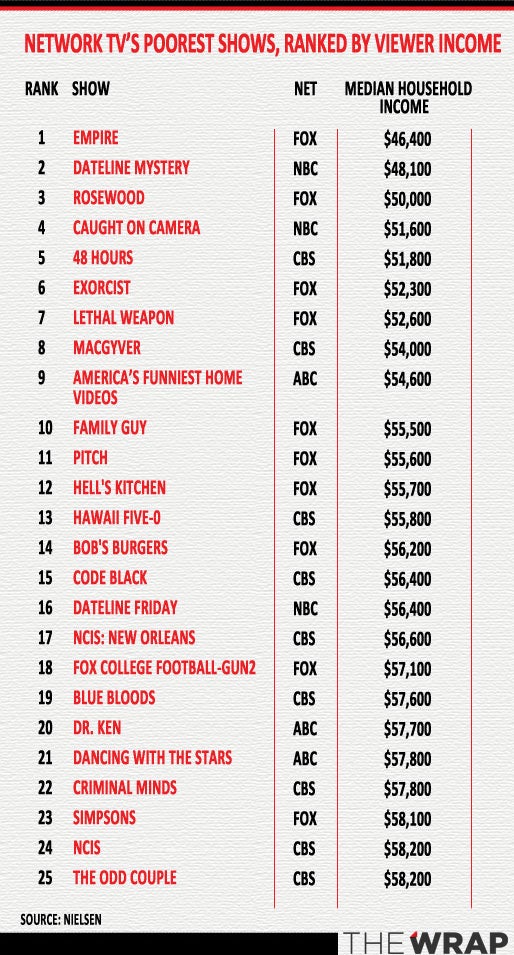