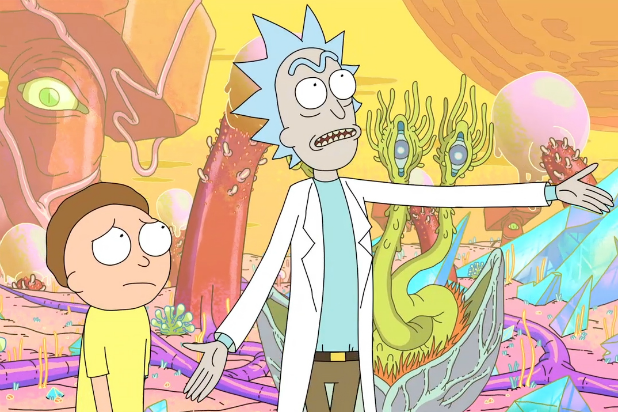 It seems crazy to release the premiere of an anticipated show’s new season on April Fools’ Day without any marketing, announcements or even a hint that something would happen, but that’s what happened with “Rick and Morty” Season 3.

On April 1, 2017, around a year and a half after Season 2 ended on a massive cliffhanger, the word started to spread that the premiere had aired.

I remember my reaction, which mostly consisted of dismissal. However, after a few hours — specifically around the next morning — people were reviewing the new episode and commenting on it. It wasn’t a prank. It was real.

“If you used the internet that night, you couldn’t avoid something about ‘Rick and Morty,'” co-creator and star Justin Roiland recalled in a phone interview with TheWrap. “It was a moment in the show’s history where [it] was unavoidable.”

Viewers always wait anxiously for whatever Adult Swim would pull for its April Fools’ gag. Past “jokes” included the return of late-90s anime programming block Toonami and a promise that it would air “Aqua Teen Hunger Force Colon Movie Film for Theaters” in its entirety, only to actually play it in a small window in the corner of the screen.

Also Read: How 'Rick and Morty' Benefited From Female Writers

Adult Swim’s executive vice president and creative director Mike Lazzo was the brains behind this particular “prank.” Both Harmon and Roiland were hesitant to the idea of releasing the episode without any fanfare, especially after delays and rumors about fighting behind the scenes had people wondering if the new season would premiere at all.

“I was absolutely terrified that it would be a complete fumble,” co-creator Dan Harmon said and not only because he thought debuting it unannounced might not have the intended effect. “I just kept thinking ‘we’re going to unceremoniously say that our premiere is a joke.’ The thing that panicked me the most is that we would follow up airing our premiere saying the season will be here next summer, but we’re going to be saying that on April Fools’ Day.”

And my reaction — that the rumor spreading was in fact the joke — was apparently and preemptively taken into consideration.

“The idea of doing it on April Fools’ was such a funny idea because the fans would be texting each other ‘hey, this episode that we’ve been waiting for so long and begging the creators, harassing the creators for answers as to when it’s going to air, is on television right now,” Roiland said.

But it worked. In terms of just numbers, “Rick and Morty” placed in the top 25 for original cable shows on that day, a Saturday, nonetheless. Its first airing, at 8 p.m. brought in around 676,000 viewers. The episode was aired multiple times throughout the night, and the numbers only increased as word spread.

In total, the episode attracted 5 million viewers and another 3 million unique viewers online, according to Adult Swim.

“I’ve finally gotten to the point where I ignore my own voice about that [marketing] stuff,” Harmon said. “Adult Swim knows what it’s doing when it comes to marketing and that’s a fact as simple as gravity.”

Roiland and Harmon also saw how the episode premiere impacted the fandom. According to them, the popularity of the show skyrocketed after the stunt. The two said that their closets are filled with “Rick and Morty” t-shirts that they would often wear. Both noted that after the Season 3 premiere, the amount of comments they got on the shirts exploded. Roiland said that it hit a “critical mass.”

“I now stopped wearing the t-shirts, not because I don’t want to feel bothered, but it’s because I feel like an egomaniac in the morning,” Harmon said. “I know that almost every stranger in an elevator is going to point at the shirt and say ‘I know that show, I like that show.'”

That’s not necessarily a bad thing. The popularity of the show is such that McDonald’s even got in on the action. In the “Rick and Morty” Season 3 premiere, a running gag involved Rick’s love of the chain’s Szechuan dipping sauce, which was only available as a promotion for the Disney film “Mulan” in 1998. In the hours before the second episode aired over the weekend, Roiland announced that McDonald’s had managed to find some — through a time portal, of course.

“It’s surreal,” Roiland added. “I don’t think we ever anticipated or even were remotely close to this level of fandom. It’s amazing and super rewarding, and the fans are incredible.”