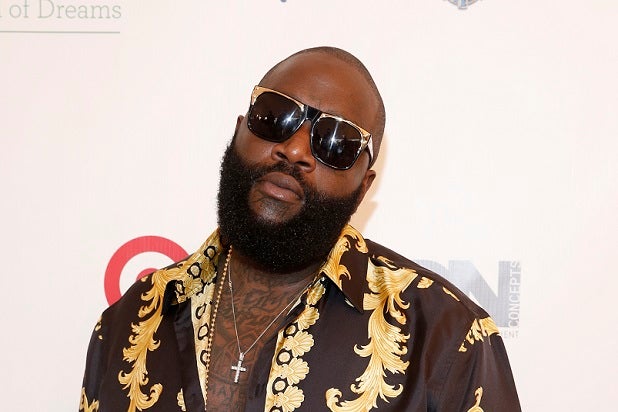 Rick Ross has another legal woe to worry about.

The rapper, who was arrested on kidnapping and aggravated assault charges in June, is being sued by a woman who claims she was drugged and raped during Grammy Awards weekend.

The woman, identified as Jane Doe in the lawsuit, says she met a Ross associate named Thaddeus “Black” James in 2013, and in February attended the Cannabis Cup, where Ross was performing, with James.

The suit alleges that James offered her a drink on the way back from the performance, and “turned away from Plaintiff and held the cup and bottle out of her view.” After taking the drink, the lawsuit claims, the woman became “intensely dizzy and ill,” blacking out shortly thereafter. According to the suit, filed in Superior Court in Los Angeles, she regained consciousness and was led to Black’s room at the W Hotel, where she again lost consciousness.

The woman claims that, when she came to, her clothes were jostled and seemed to have been put on her body by someone other than herself.

According to the suit, the woman believes that she was drugged and raped by James. She went to the hospital four days later, and subsequently contacted police, the suit says.

While Ross is not implicated in the alleged rape, he’s being sued in part for negligent supervision and retention, because he “knew or in the exercise of due care, should have known” that James “had a propensity, character trait and practice of drugging and sexually battering females.”

Ross’ label Maybach Music Group and Warner, its former distributor,  are also named in the lawsuit.

Ross has not yet responded to TheWrap’s request for comment.