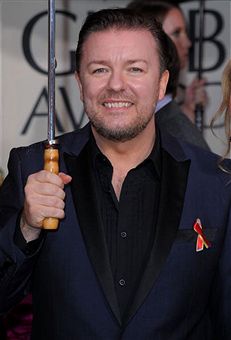 He didn’t get the best reviews, and he took some of his funniest shots at the organization that hired him, the Hollywood Foreign Press Association, but Ricky Gervais was apparently a big hit with the HFPA when he hosted the Golden Globes in January.

The British actor and comic will return as host for  the 2011 Globes ceremony, which will take place Sunday, January 16 in Beverly Hills.

Gervais, the creator of the British version of "The Office" and the star of such films as "The Invention of Lying," was the first Globes host since 1995.  Ratings for his show were up 14 percent over the previous year; the show won its time slot and drew 16.9 million viewers.

The Globes ratings marked a boost over the 14.9 million the show had drawn the previous year, but viewership was well below the 26.8 million audience for the show in 2004, its biggest year.

While Gervais could have had some influence on the ratings, the boost over 2008’s numbers was attributed mostly to the presence of blockbuster winners like “The Blind Side,” “The Hangover” and especially “Avatar,” which was named Best Picture – Drama.

After the show, Joe Adalian at theWrap wrote, "Gervais seemed a bit off his game," while guest blogger Naomi Serviss called the host "unbearably boring when he could have been explosively funny."

On the other hand, Gervais brought a rare irreverence to the gig, and a willingness to bite the hand that feeds him. At one point, talking about an award handed out by about seven dozen foreign reporters who have never been considered immune to flattery and wooing, he commented, "One thing that can’t be bought is a Golden Globe."  A pause.  "Officially."

On Twitter, responses to the news ranged from to "Great news!" to "I guess we learned nothing last year" to "Stock up on the booze, HFPA!"

Gervais claimed he wouldn’t rehearse and would be drinking during the show.  In fact, say show staffers, he did minimal rehearsal, and his imbibing was limited to the glass to carried onstage with him for comic effect.