One of the biggest laughs in “Ride Along 2” comes early, and it’s a wholly unintentional one — the opening credits reveal that the script (by Phil Hay and Matt Manfredi) is “based on characters by Greg Coolidge.”

“Characters”? If they mean Ice Cube reprising his stolid portrayal of a block of granite and Kevin Hart further wearing out his big-screen welcome as a “shrieking” (to quote the film) loudmouth, then “characters” is far too generous a term for the barely-there personages that these actors have been asked to revive.

Once again, these talented performers are paired with director Tim Story, who found genuine laughs — and yes, actual characters — with them in “Barbershop” and “Think Like a Man.” In the “Ride Along” movies, however, both the stars and the filmmaker are phoning it in, mistaking volume for wit and punches for punchlines. It’s a dispiriting waste of abilities on both sides of the camera.

This go-round sees yappy video-gamer Ben (Hart) as a police academy graduate and probationary officer who nonetheless sees himself as a bigger fish on the force, tagging along with his future brother-in-law James (Cube) on a drug bust that leads to massive destruction of property as well as injury to James’ partner. (The unlucky cop is played by Tyrese Gibson, whose presence underscores the fact that Story doesn’t know how to stage a muscle-cars-and-sexy-ladies sequence nearly as well as any of the “Fast and Furious” directors.)

The drug dealer’s flash drive leads James to Miami hacker A.J. (Ken Jeong, giving his stock obnoxious second-banana performance). Ben insists on accompanying James to South Beach, and while the seasoned cop at first refuses, he finally relents in the hopes that Ben will learn some humility once he inevitably messes everything up. (It’s also a favor to James’ sister, bride-to-be Angela (Tika Sumpter), who wants Ben out of her hair so she can finalize arrangements with wedding planner Sherri Shepherd; like the rest of the cast, Shepherd is given nothing funny to do or say.) 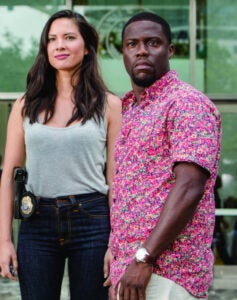 What ensues is a tired retread of the already listless events of the first “Ride Along,” with Ben trying James’ (and the audience’s) patience with his shrill outbursts while heroically drawing upon his video game achievements in real-life situations. (The “Ride Along” movies offer adolescents of all ages the same vicarious fantasy as “Pixels,” namely that the lessons learned in Call of Duty will miraculously translate to real life.)

The only new element here is Olivia Munn as a Miami detective whose skill at disabling James via soft-tissue manipulation makes her an instant love interest for James. This movie doesn’t waste her talents quite as much as “Mortdecai” did – Munn at least gets to do some sensuous salsa dancing with bad-guy Benjamin Bratt – but when you compare her big screen roles with the richness of her work on “The Newsroom,” it’s no wonder so many actresses flee to television.

As for Kevin Hart and Ice Cube, they’re forced to play the same loud-guy-fuming-guy bits over and over throughout the film, reducing them to a fifth-rate version of Lucy and Ricky Ricardo, only heavily armed.

From gleaming cars cruising past the ocean to bikini-clad models taking outdoor showers, there’s not a Miami Beach cliché that Story and cinematographer Mitchell Amundsen (“Transformers”) can resist; the only moment that’s of any visual interest comes when a car chase turns into something out of Grand Theft Auto: Vice City in Ben’s PlayStation-programmed mind.

The film’s most genuinely funny moment involves A.J.’s ringtones, which should perhaps come as no surprise — the stakes, and the laughs, are so small that “Ride Along 2” was apparently designed to be watched on your phone.