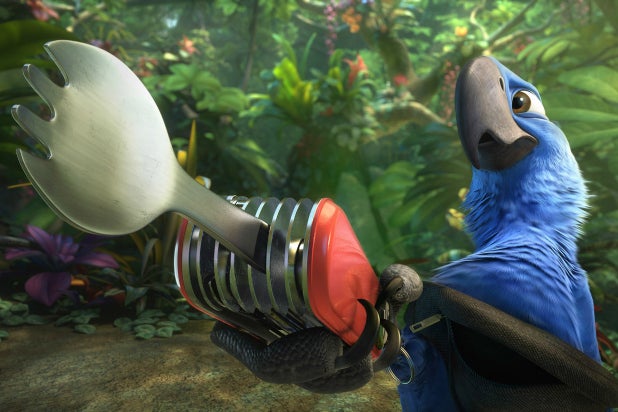 The latter is the presiding sentiment of “Rio 2,” a sequel to 2011’s “Rio,” an animated film whose only real defining characteristic was that it was less crappy than the “Ice Age” movies. (Granted, its other memorable feature, in certain quarters, was the fact that it grossed nearly half a billion dollars worldwide. Hence, another visit with characters that barely anyone over the age of nine can remember.)

Since their last dreary adventure, macaws Blu (voiced by Jesse Eisenberg) and Jewel (Anne Hathaway) have settled down in environmentally protected bliss in Rio, where they’re now raising three hatchlings. The family is the last of the blue macaws — or so they thought.

Blu and Jewel’s human keepers Linda (Leslie Mann) and Tulio (Rodrigo Santoro) stumble upon evidence of more blue macaws deep in the Amazon rainforest, which prompts Jewel to plan a family vacation to the jungle, despite Blue’s continued citified-ness. (Get ready for lots and lots of jokes about fanny packs and GPS.)

Blu feels even more out of his element when forced to go beak-to-beak with Jewel’s father Eduardo (Andy Garcia) and her childhood boyfriend, Roberto (Bruno Mars). And if those two weren’t adversaries enough, there’s also a nut-tree turf war with the local parrots, as well as a greedy developer (Miguel Ferrer) illegally cutting down trees and trying to stop Linda and Tulio from having the rainforest declared off-limits.

Oh, and did I mention that cockatoo Nigel (Jemaine Clement) is seeking revenge against Blu because of things that happened in the first movie that have completely slipped my mind? Nigel has followed the birds down the Amazon with lovesick poisonous tree frog Gabi (Kristin Chenoweth) in tow.

Chenoweth gets the movie’s best scene, a musical number in which she laments the fact that she can never embrace her beloved because of her toxic touch. It’s a song that allows the Broadway and TV star to trill, belt and generally diva it up to the hilt. The musical moments, on the whole, stand out as the highlights of the film; whether it’s the Sergio Mendes contributions to the score, a psychedelic dance routine that suggests Busby Berkeley choreographing the Enchanted Tiki Room or Clement breathing hammy new life into that chestnut “I Will Survive,” “Rio 2” becomes watchable when the flat characters shut up and sing.

Also read: Kristin Chenoweth in Negotiations to Join Jennifer Lopez in ‘The Boy Next Door’

Alas, the music eventually stops, and we’re back to the umpteenth movie about the outsider proving himself and saving the day; even Eisenberg and Hathaway sound bored out of their wits. There are a handful of amusing gags, most of them having to do with jungle creatures auditioning for a Carnaval extravaganza, but the film too often crawls when it could be launching skyward.

If there must be a “Rio 3,” let it follow the lead of the surprisingly delightful third “Madagascar” movie, which followed two unexceptional installments. Hire Noah Baumbach as a co-writer, throw a polka-dot afro on one of the characters — do whatever it takes.

Otherwise, we’ll be stuck with another dreadful “Ice Age”-ish franchise, albeit with brighter plumage. Cue the fidgeting.