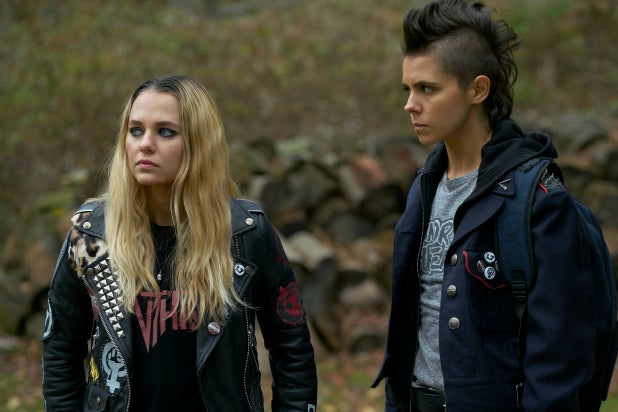 Potter’s Bluff used to be a nice place to live. Idyllic, even. Then, we’re told during the comic-book-style intro to “Riot Girls,” a mysterious wasting disease all but destroyed the entire population — except the kids, that is.

Jovanka Vuckovic’s feature directorial debut has a punk-rock energy befitting the rebellious youths who inhabit it, a not-so-merry band of survivors doing what they can to eke out an existence in post-apocalyptic suburbia circa 1995.

On one side of that conflict are the villainous Westside Titans, a militia-esque group of jocks easily identified by their blue-and-yellow letterman jackets, and on the other are the ragtag Eastsiders. There’s something of a revenge-of-the-nerds dynamic to it, only instead of nerds, it’s misfits more generally; though suspicious of outsiders, they’re generally welcoming of anyone in need.

Watch Video: Kerry Washington on Why Her Kids Are Not Immune From Police Brutality Just Because She's Famous

Chief among this motley crew are Nat (Madison Iseman, “Annabelle Comes Home”) and Scratch (Paloma Kwiatkowski), two girls whose maybe-not-platonic friendship is tested when they’re caught in enemy territory on a mission to save the former’s brother from the Titans. There’s more on their minds than mere survival, of course. Nat and Scratch have just found a puppy, and defining what their relationship is and is not proves even more difficult than it would have in high school. Living through the end of the world forces you to grow up, but some adjust to a world without grownups more easily than others.

Still, “Riot Girls” maintains an even keel. The transition between some scenes is made to look like we’re moving from one panel to the next, and characters are introduced via illustrations that likewise look torn from the pages of a comic book. It’s an affectation whose novelty would usually wear off quickly, but here it mostly remains fun throughout — there’s a youthful energy to “Riot Girls” reminiscent of “We Are the Best!!” and “Sing Street,” and not just because the energetic soundtrack plays a key role.

Vuckovic, who previously helmed a segment of the horror anthology “XX,” has a facility for both genre nastiness and working with a cast of young adults. Little is spoken of the epidemic that wiped out all the adults, and there’s a sparseness to this kids-only world that registers as lived-in and real. Occasional moments of extreme violence feel out of step with the otherwise lighthearted tone (a bullet through the face here, a crossbow bolt through the neck there), however, and “Riot Girls” strays from the sweet spot it establishes early on once the bodies start piling up.

Much more compelling is the makeshift society these dueling groups have created for themselves. As underlings complete menial tasks at the behest of their Titan superiors, a recording plays over the school’s PA system on a loop: “We are titans. We are champions. Our motto is strength, power, respect.” The Eastsiders are far less regimented and fascistic, but they also live in fear.

Just as we truly get immersed in all this, however, “Riot Girls” comes to an abrupt end. At just 81 minutes, it at times feels more like an extended pilot (for a TV series to rival “Riverdale”) than it does a standalone film. This is a fun world to explore, but we’ve just barely scratched the surface by the time we’ve left it.

When that happens, “Riot Girls” feels like a missed opportunity. The stakes are never as high as you’d expect (or perhaps hope) of a story in which most of the world’s population is dead, but that’s kind of the point — teenagers, it seems, can be blasé about anything. “Riot Girls” is occasionally at risk of inspiring the same feeling in its audience, but for the most part it survives this ordeal surprisingly unscathed.