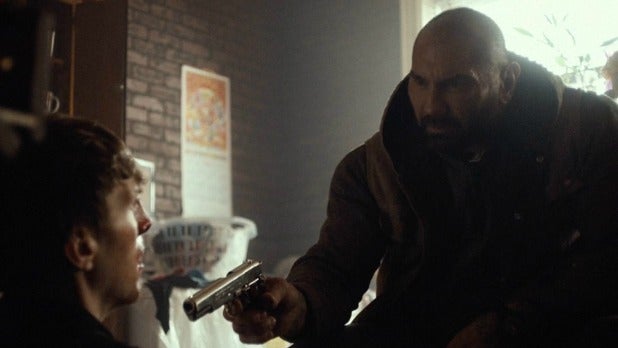 On the way to Grandma’s house with a new boyfriend in tow, Lucy (Snow) steps off the subway into an utter bloodbath on the streets of Brooklyn’s Bushwick neighborhood, according to the film’s description. Texas is attempting to secede from the Union, and militia forces have descended upon New York City to claim it as an East Coast base of operations and a negotiation tool. Faced with a flurry of whizzing bullets and total destruction around every corner, Lucy takes shelter in the basement of Stupe (Bautista), a burly war veteran who reluctantly helps her traverse the treacherous five-block stretch of Bushwick to reach her destination –assuming it’s still there.

Cary Murnion and Jonathan Milott directed “Bushwick” from a screenplay by Nick Damici and Graham Reznik. Their directorial feature film debut, “Cooties,” premiered at the 2014 Sundance Film Festival and was acquired by Lionsgate for domestic distribution and Universal for international distribution.

“RLJ Entertainment is a fearless distributor that specializes in releasing unique and courageous projects,” said Murnion and Milott. “Films like ‘Bushwick,’ and their 2015 release, ‘Bone Tomahawk,’ show their passion and commitment for working with filmmakers who challenge the conventions of genre films. We are thrilled about this partnership.”