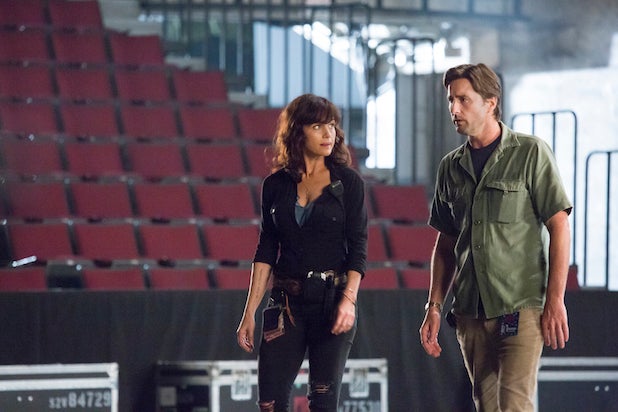 In 2000, writer-director Cameron Crowe fictionalized his youth as a Rolling Stone reporter for the movie “Almost Famous,” exploring the romance and reality of being on the road with a rock ‘n’ roll band. Sixteen years later, Crowe revisits that terrain for “Roadies,” which features some of what the filmmaker does pretty well and far too much of what has doomed his recent efforts.

Populated by likably quirky but flawed characters, this Showtime series, premiering Sunday, focuses on the men and women responsible for keeping a tour rolling from city to city. But it’s far too cutesy for its own good, resulting in a strained workplace comedy that too often plays like a rehash of Crowe’s greatest hits.

Luke Wilson and Carla Gugino star as Bill and Shelli, the tour manager and production manager for the Staton-House Band, a veteran rock group whose best days may be behind it. Typical of Crowe’s characters, Bill and Shelli have a flirty, lively rapport, their long friendship containing more than a whiff of sexual tension. (She’s married to a fellow production manager who’s currently touring with Taylor Swift; he sleeps with women on the road who are way too young for him.)

Through its first three hour-long episodes, “Roadies” keeps the Staton-House Band in the background, instead paying attention to the daily tasks Bill, Shelli and their team execute to prepare for that night’s show. As he did with “Almost Famous,” Crowe (who directed all three episodes available to critics, as well as writing two of them) wants viewers to understand how a touring rock band becomes a makeshift family, the roadies forming an intimate connection because of their demanding work and close-quarters living arrangements on cramped tour buses.

“Roadies” can be a fun insider’s peek into how a concert comes together, and Crowe has filled his show with plenty of “colorful” personalities, including a guitar tech (Peter Cambor) who sports a fake British accent, a dedicated young crewmember (Imogen Poots) who fears she’s losing her passion for music, and a snooty British adviser (Rafe Spall) hired to cut costs.

Every character has been touched by Crowe’s gift for clever dialogue, as well as his affection for oddballs who don’t quite fit in conventional society. But where that technique had significant charm in early films such as “Say Anything” and “Jerry Maguire,” it started to calcify into shtick around the time of 2005’s “Elizabethtown,” Crowe producing irritatingly faux-adorable love stories that, rather than seeming attuned to the peculiar rhythms of everyday life, began to creep into self-parody.

Crowe’s cloying compassion rears its ugly head consistently in “Roadies,” undercutting his show’s attempt not just to penetrate this insular world but also to articulate the challenges facing those trying to make a living in the modern music business. That’s a shame considering that “Roadies” is at its best when it deglamorizes life as a member of a touring crew, revealing how this often difficult, thankless work is, nonetheless, preferable to traditional 9-to-5 jobs for a certain type of restless individual.

This perspective is most acutely experienced by Bill, who’s just a few years sober and, now in his mid-40s, can’t see a future for himself beyond the road. Wilson harnesses his hangdog, everyman expression to give us a sense of Bill’s existential crisis, which he hides behind an affable demeanor. The actor has nice chemistry with Gugino, who along with Wilson consistently reminds us that these characters are perpetually exhausted and stretched too thin.

But thus far, neither their relationship nor anyone else’s on “Roadies” leaps off the screen. Instead, we’re saddled with episodes bearing sitcom-y premises. In one, Spall’s clueless advisor must determine who needs to be fired, while another centers on the crew being forced to welcome a hostile, influential music blogger (an over-the-top Rainn Wilson) onto the tour. Presumably based on opinionated music-industry analyst Bob Lefsetz, the episode devolves into cheap drug jokes before lurching toward another of Crowe’s paeans to these roadies as a lovably dysfunctional family.

It’s a potent theme, but like the show’s tendency to include real-life musicians as the Staton-House Band’s opening act — everyone from indie band the Head and the Heart to Fleetwood Mac’s Lindsey Buckingham — it feels forced, Crowe grasping for something grander that’s out of reach. Maybe over time “Roadies” will settle into a groove, but as of now it’s yet to find its rhythm.