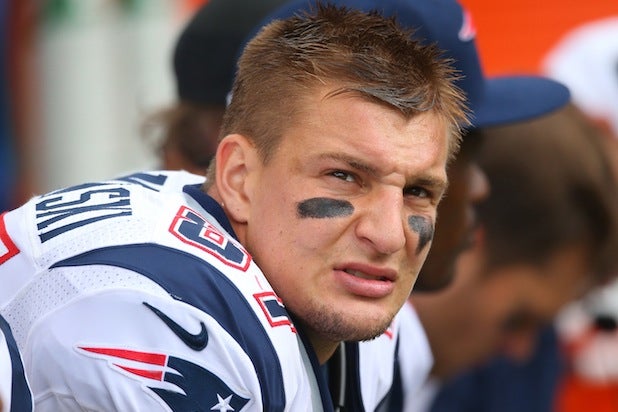 Gronkowski is friendly with Boston native Mark Wahlberg, who is producing the feature adaptation of the popular HBO series, which is based on Wahlberg’s own experiences in Hollywood.

Gronkowski has been asked to make a cameo appearance as himself in the movie and while some have speculated that the known party-boy may show up reveling in Hollywood excess, drinking and dancing alongside fictional movie star Vincent Chase and his friends, TheWrap has learned that Gronkowski’s manager is hoping for a positive depiction in a non-party setting. If he spikes anything, it’ll be a football, not alcoholic beverages, not that “Entourage” fans should expect to see Dr. or Professor Gronk.

Production begins in January, which is when the NFL Playoffs kickoff. You can bet that if the “Entourage” movie proves to be a distraction for Gronkowski, there will be no “hugging it out” with Patriots coach Bill Belichick.

Speaking of hugs, Vince and the gang have their wandering eyes on swimsuit model Kate Upton for the female lead in the “Entourage” movie, as TheWrap first reported.

Gronkowski has been looking to capitalize on his football fame by pitching an animated TV show about his family titled “The Gronks,” which is every bit as entertaining as it sounds.

Gronkowski is represented by Wahlberg’s agency WME as well as Penzi Management, and his “Entourage” cameo was first reported by TMZ.

Full Disclosure: This reporter owns Rob Gronkowski in two fantasy football leagues, including a keeper league in which he’ll never be traded. Ya hear me, Pete? Stop sending offers for Arian Foster!