Director/producer/choreographer Rob Marshall is no stranger to the challenges of making successful musicals and movies. He triumphed with “Chicago,” which won six Oscars, including Best Picture, and another three for “Memoirs of a Geisha.” 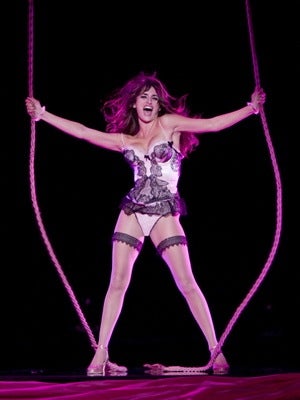 His new musical is titled “Nine, ” based on the Tony Award-winning 1982 Broadway production of “Nine” that was based on Federico Fellini’s classic "81/2," starring Daniel Day-Lewis and a bevy of female stars, from Sophia Loren to Penelope Cruz to Fergie.

Marshall talks about the state of musicals, getting Loren — and his next project with Capt. Jack Sparrow.

People keep saying that the musical’s a dying genre.
It all has to do with the execution. Everyone said gladiator movies were dead — then Ridley Scott came along. My hope is that musicals continue to flourish because there’s nothing like it, when they work. And I’ll keep making them, as long as I find the right projects.
What’s the main challenge of making a musical?
Musicals on stage are so different. It’s accepted that it’s totally artificial. But film is so real, so you have to ensure that the material translates to the medium. I took my key from Fellini and the way he moved so seamlessly from fantasy to reality to memory, because the big issue with all musicals is, “Why are they suddenly singing?” It’s that cringe moment! And if you don’t solve that upfront, you can go down the wrong track very easily.
For me, the solution was to have the musical numbers as fantasies taking place in Guido’s mind. That gave me the license to suddenly switch to these big numbers and make them work as part of the whole.
What drew you to “Nine”?
I was anxious not to repeat “Chicago,” and what was so intriguing about this material is that it covers a wide spectrum of human emotions. It’s not a classic narrative. It’s not the rise and fall of a man — but about a man in crisis, and that’s challenging.
On stage it’s pretty much all a fantasy, and I wanted this to be reality-based, with fantasy and memory. And then it’s based on Fellini’s “81/2,” an iconic masterpiece you can’t duplicate. So you have to make a hard left turn — and thankfully as a musical we’re a different genre. We’re more in the tradition and trajectory of “Sweet Charity.”
How confident was Daniel Day-Lewis as a song-and-dance man?
Pretty confident,. He’s played in bands and sung — and he has a beautiful voice. But he worked very hard to find the right size of his voice to match his vocal range as an actor. He found it very rewarding – but also terrifying at the same time.
Penelope Cruz is quite a revelation doing her sexy bump-and-grind number.
She was the first actor I met, and she wanted it so badly. We actually began casting before we began writing, and she sang for a couple of roles, including Claudia, that Nicole Kidman ended up playing. But the great thing about her is that she’s this fantastic dancer and singer! I was so surprised.
The cast is mainly women — didn’t you and Daniel feel like a minority?
(Laughs) You’re right, but I never thought of it in those terms. And just working with Sophia — we all had to pinch ourselves. There’s a scene we shot in a piazza in Rome where she and Daniel pull up in a sports car, and I couldn’t quite believe I was doing it. It felt just like I was shooting a Fellini movie.
You actually shot at Cinecitta …
Yes, we did all the studio exteriors there and I felt the ghost of Fellini watching us — his office sits right there by Stage 5, and I thought, “You’d better measure up.” But it was more inspiring than intimidating to feel his world.
“Dreamgirls” was snubbed by Oscar. How do you feel about “Nine’s” chances?
I honestly don’t want to think about it. I was so blissfully naïve about “Chicago” — I had no sense we’d even get nominated, let alone win Best Picture. So I’d like to stay like that. (Laughs.)
What’s next? You’ll be working with Johnny Depp on ‘Pirates 4”?
He asked me to do it, and we’re getting closer and closer to it. I’ve always wanted to do something like that.
So it’ll be a musical “Pirates”? I’m joking.
(Laughs hard) Can you imagine? But let me tell you, as a choreographer, a musical’s not that far away from action. You have to choreograph it all, and it’s a world I’ve always wanted to explore. We’re waiting on a script, so we hope to start shooting next year.
x
Looks like you're enjoying reading