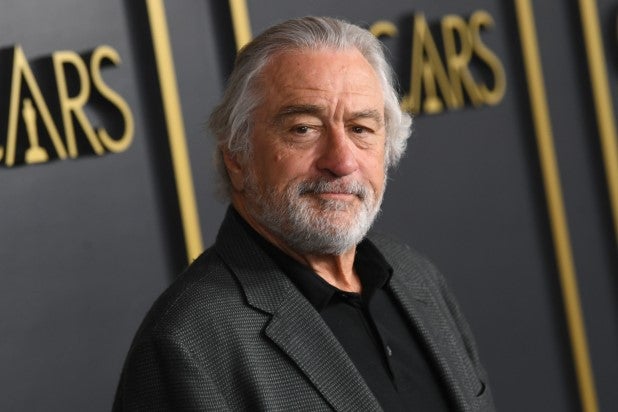 101 Studios has picked up the domestic rights to release “The War With Grandpa,” the family comedy starring Robert De Niro, this fall, the studio announced Monday.

“The War With Grandpa” stars De Niro alongside Oakes Fegley in a film from director Tim Hill (“The Spongebob Movie: Sponge on the Run”), and it will open theatrically on September 18, 2020.

The movie is based on Robert Kimmel Smith’s popular children’s fiction novel of the same name and it’s the story of a grandfather and grandson who were once close but come to butt heads once grandpa moves in and has to share a bedroom with his grandson. The boy will stop at nothing to get his room back, scheming with friends to devise a series of pranks in order to drive his grandpa out, only for his grandfather to respond in all out war.

101 Studios will release the movie in partnership with financier Brookdale Studios. “The War With Grandpa” was produced and financed by Marro Media Company. Ingenious and Joe Gelchion of Tri-G provided additional financing and serve as the picture’s executive producers.

“The War With Grandpa is a labor of love because the book was read and pitched to me by my then eight-year-old son, Tre. This film is a true family affair,” Rosa Peart, producer and co-founder of Marro Media Company said in a statement. “We wanted to make a film where everyone of all ages can watch and enjoy. We are very excited to introduce the next generation of kids to a once in a generation actor… Mr. De Niro.

“Brookdale is thrilled that our inaugural release is ‘The War with Grandpa,'” Marvin Peart, CEO of Brookdale Studios said in a statement. “With laughs from start to finish and a remarkable cast led by Robert De Niro, this film is the ultimate family film that we can’t wait for audiences everywhere to see.”

“As theaters are coming back online, we are very excited to release a film that the whole family can attend,” David Glasser, CEO of 101 Studios said in a statement. “In fact, what drew us in most to the project is the universal family themes. The film chronicles the always tumultuous, but loving family dynamics–themes that will resonate with everyone.”

The deal for Marro and Brookdale Studios was handled by Schuyler Moore of Greenberg Glusker. Leif Cervantes de Reinstein from Sheppard Mullin handled the deal on behalf of 101 Studios.

Here is a look at the actors who took on the challenge of playing the legendary larger than life bootlegger, racketeer, killer and organized crime boss

Notorious mobster Al Capone was a larger than life bootlegger, racketeer, killer and organized crime boss in the first half of the 20th century, who has been portrayed on big-screen and small for seven decades. Here is a look at the actors who took on the challenge. And, if you're curious, here is archival footage of Scarface himself.